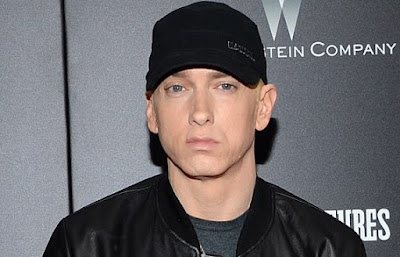 Eminem has opened up about looking for love more than a decade after the end of his marriage to high school sweetheart Kimberly Anne Scott.

The rapper, who was married twice to Kimberly until their second divorce in 2006, revealed he's used the dating app Tinder, as well as jokingly referencing the use of gay app Grindr, and has even gone to strip clubs to meet women.

'It's tough,' the 45-year-old told Vulture. 'Since my divorce I've had a few dates and nothing's panned out in a way that I wanted to make it public. Dating's just not where I'm at lately.'

It's not certain if the rapper was joking about his methods for meeting people, but aside from Tinder, Eminem also said he would also try to find dates on Grindr and at strip clubs.


'And Grindr,' he told the interviewer with a laugh. 'Going to strip clubs is how I was meeting some chicks,' he added. 'It was an interesting time for me.'

The 8 Mile star assured the interviewer he wasn't lonely.

'Am I lonely?' he said after asked if fame had been a solitary experience for him. 'No, I’m good. Thanks for asking though.'

Their second marriage was short-lived as well, with the couple divorcing again that same year.