APC, PDP Clash Over $1b Cash To Fight Boko Haram 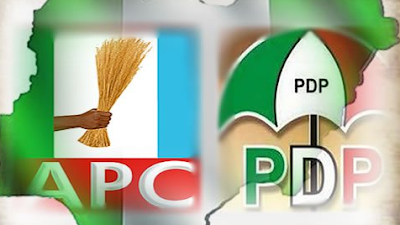 The row over the $1 billion anti-Boko Haram battle fund to be withdrawn from the Excess Crude Account (ECA) grew yesterday, with the ruling All Progressives Congress (APC) and the opposition Peopes Democratic Party (PDP) throwing darts at each other.

The APC described the allegation by the PDP that the government planned to pump the money into its reelection as “ludicrous and baseless”.

It asked the PDP   to demand for accountability in the spending of the fund rather than imputing political motives.


APC National Publicity Secretary Bolaji Abdullahi said in a statement that being in opposition did not imply opposing everything before one has the opportunity to understand the issues.

Abdullahi said the NGF that approved the money had 11 PDP governors, who would not support voting money to fund another party.

He noted that the allegation that the money was meant for the APC to prosecute its 2019 campaign only implied that the PDP was accusing its governors of anti-party activity.

The statement reads: “We note the statement issued by the PDP on the issue of $1 billion approved for the Federal Government from the Excess Crude Account (ECA) for the prosecution of the war against terror.

“We also note the preposterous allegation by the PDP that the real purpose of the said $1 billion was to fund our party’s presidential activities, ahead of 2019. We find this allegation baseless and ridiculous, to say the least.

“The NGF that granted the approval has 11 PDP governors as its members. This means that more than one-third of NGF is made up of members of other parties other than the APC.

“We wonder how the governors who are not members of our party would support the decision to approve funds that were ostensibly meant to fund another party. In essence, the PDP is by this allegation accusing their governors of disloyalty or suggesting that they were bewitched into supporting the decision. It is that ridiculous.

“However, we can understand why it is easy for PDP to arrive at its ludicrous allegation. A similar approval in excess of $2 billion was granted to the PDP government when they were in power. They knew what they did with the money. It is a classic case of a serial killer, who sees even a table knife as a murder weapon.

“The PDP presided over a government that made it possible for money meant for weapons to be diverted into paying marabouts and all manner of political jobbers ahead of the 2015 election.”

The statement added: “Therefore, the PDP thinks the same thing is about to happen. They have not realised that it is a new day and President Muhammadu Buhari will not play politics with money meant to protect the lives of innocent Nigerians or allow anyone to engage in such brigandage that Nigerians suffered under the PDP.

“Another reason that PDP has given for opposing the approval was that the Federal Government has claimed that Boko Haram has been technically defeated. The military authorities have done enough to explain the need for the money. We therefore find no need to repeat the arguments.

“It appears however that the PDP does not understand that winning the peace is as important as winning the war. There is, therefore, no contradiction in saying that Boko Haram is technically defeated and saying that more weapons and training are needed for our military and the military of neighbouring countries whose co-operation is necessary to finally rid our countries of the menace of Boko Haram.”

The APC said: “We conclude by saying that we understand the pressure that the PDP is facing to justify its role as an opposition party, but they need to be reminded that opposition is not the same as opposing everything, including those things that are critical to national interest.

“We welcome PDP to play its part in ensuring that the money or any public money at all is used for the purpose for which it is intended. In this case, they can simply ensure that their 11 governors demand accountability for the money that they have joined in approving.”

But the PDP insisted that the withdrawal remained a ruse.

A statement last night by the spokesman of the PDP, Kola Ologbondiyan, said no amount of finger-pointing by the APC could justify the “fraudulent” attempt by the Federal Government to withdraw $1billion from the ECA to finance partisan activities, adding that APC’s arguments were diversionary and lame.

The PDP also maintained that the claim by the APC that 11 PDP governors were part of the approval in a meeting superintended and eminently directed by Vice-President Yemi Osinbajo was merely begging the question. It further underpins the manipulative proclivities of the APC government, it said.

The statement said: “The truth remains that the APC government has been caught in the act and no amount of diversionary finger-pointing will detract from the fact that it tried to use the fight against insurgents as a ruse to secure the money, which they have arranged to spend on extraneous subheads, including partisan activities.

“It is a known fact that under this APC government, monies meant for insurgency related issues in the Northeast had been diverted and that the only reasons the culprits have not been prosecuted is that they enjoy the cover of APC government.”

The PDP said Nigerians were counting the exit day for the APC-led Federal Government and no amount of propaganda will save the ruling party from the doomsday.