Floyd Mayweather Adopts A Panda For £11k & Names It After Himself 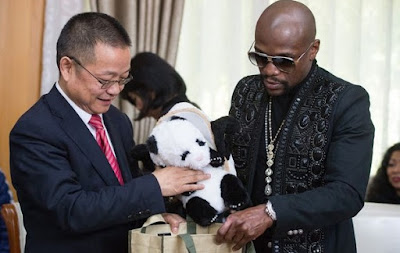 Floyd Mayweather's trip to China hasn't been filled with the pandemonium he became accustomed to during his time in the ring, but he has certainly taken a leaf out of Mike Tyson's book.

As well as enjoying a stroll across The Great Wall of China during his visit, 'Money' took it upon himself to make one local resident famous, a Giant Panda living in the Research Base of a breeding facility in Chengdu.

While enjoying his all-expenses-paid vacation in China, Mayweather paid a visit to the panda-breeding facility, and clearly did more than just take in the sights, as 'Money' made the impulsive decision to adopt the panda.

Luckily for the panda, whose birth name was Mao Dou, his adoption means his name has been changed to 'TMT Floyd Mayweather', while the money-man celebrated their new-found bond from a far at the panda-breeding facility.


As a member of staff entered the panda's enclosure, Mayweather was forced to enjoy the special moment from the on-looking walls as he took Selfies with his new friend, before sealing their friendship with an apple – which he hovered over the animal's head, hanging from a lengthy piece of bamboo.

However, while he couldn't take the panda home with him, Mayweather did get to take home a complimentary stuffed toy, which will undoubtedly fit nicely at the foot of his bed inside his Beverly Hills mansion.

Mayweather revealed he was being paid £2million for his 'luxury' trip to the far east - along with 23 of his friends - where the former Welterweight boxer attended a fan meeting, which also posed some interesting questions. 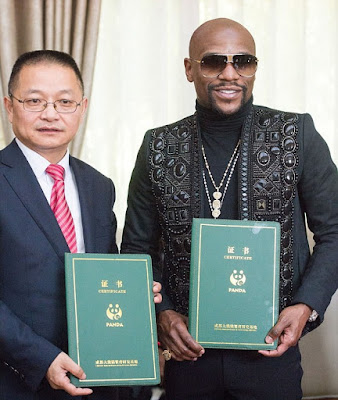 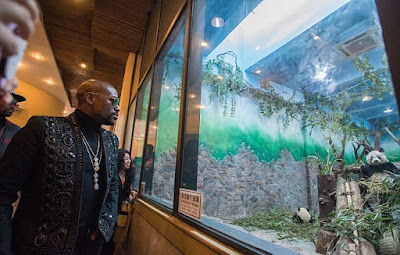