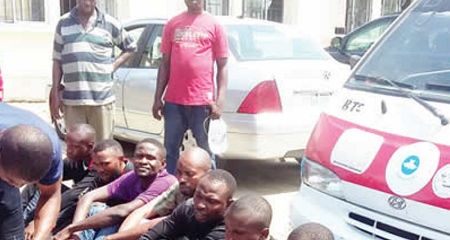 The Police in Bayelsa State have arrested a leader of the National Association of Nigerian Students, Bayelsa State chapter, and seven other undergraduates in connection with the alleged killing of a student.

The Bayelsa NANS leader, Perewari Benjamin, a 400-level student of the state-owned Niger Delta University, Amassoma, was paraded on Monday at the state command’s headquarters in Yenagoa with the other suspects.


The state Commissioner of Police, Asuquo Amba, lamented the involvement of the students in the alleged murder, adding that they were arrested for armed robbery and suspected cult activities.

The commissioner said on November 26, three drivers – Ayo Kehinde, Jamiu Salahudeen and Nwanya Chinonso – reported to the police that the suspects (students) hijacked their vehicles and robbed them at gunpoint.

He claimed that the suspects robbed Kehinde of one Techno phone, valued at N10,000 and the sum of N50,000 cash, while they dispossessed Chinonso of N1,600 cash.

“Students representing universities and higher institutions in the South-South Zone resorted to the use of firearms, which led to the death of the student. The students also involved themselves in robbery against innocent citizens.

“This leaves one to wonder about the future of our great nation. The development calls for a drastic action to curb this menace and a complete reorientation of our youths.”

One of the drivers, Kehinde, an indigene of Modakeke in Osun State, said around 10am on Saturday, the day of the election, four of the students hired buses from him at Amassoma Motor Park.

He said, “Four of the students came to Amassoma Park on Saturday, around 10am and said they needed three buses.  We agreed for N8,000 per bus. When they boarded the buses, they said they wanted to pick some persons from Biogbolo.

“One of them said I was talking rubbish and he slapped me. As he slapped me, others joined him and they started beating me and my brothers. One of them dipped his hand into my pocket and took the N50,000 I wanted to send to my wife in Lagos to pay my children’s school fees. He took the money and my ATM card, phone and seized my vehicle key. One of them brought out a gun and used the butt to hit my head.”

He said as blood gushed out of his head, the students left with his brother, whom they forced to drive them.

He said he was in that condition when he sighted a patrol van of operatives of the State Anti-Robbery Squad approaching.

He said he flagged down the van and narrated what happened to him to the SARS men, who gave the buses conveying the students a chase and caught up with them, leading to their arrest.