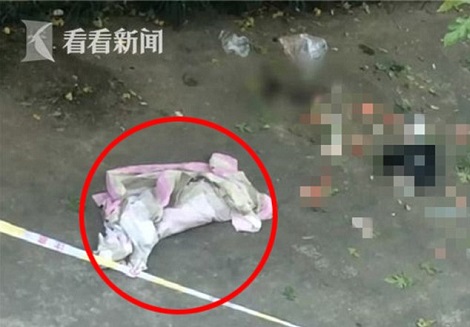 A college student inChina has reportedly thrown her newborn baby out of the window of her dorm room after giving birth in secret.

The baby, whose gender has not been identified, was found dead in an alley next to a student accommodation hall of her school.

The 19-year-old mother is studying at the Xi'an Engineering College in north-west China, and it's claimed she is being trained to be a kindergarten teacher. Students living in the hall claimed to have seen the baby being thrown from an upper floor window.

The teenage mother reportedly threw out the baby late at night and was seen the next morning at a self-study session as usual.


Pictures of the alleged dead baby emerged on November 21. One image shows it being wrapped in a blanket.

According to Kan Kan News, the incident was found out by a student as large amount of blood was seen at the alley next to Xi'an Engineering College's female dormitory.

'The baby was wrapped by a blanket and thrown from the fourth floor during recess time. There were also a lot of bloodied tissues,' said a girl living in the dorm.

School security guard confirmed the baby had no vital signs and reported the case to the police.

A 19-year-old girl, whose identity has not been revealed, was sent to a hospital for check-up.

A school teacher told Metropolitan Post that the girl is a bright and clever student.
'She never skipped a class or took sick leave. We did not notice that she was pregnant as in winter days, she was always wrapped in thick clothes,' said the teacher.

The teacher also said that the girl is 'a bit chubby', therefore it was hard for the school to tell she had been pregnant.

Her parents did not know about their daughter's pregnancy.

Xi'an policemen are investigating whether or not the baby was dead before being thrown out of the building.

Professor Jiao Heping, department of law at Northwest University of Politics and Law, told Metropolitan Post that if the baby was alive before being thrown, the girl could be charged for intentional killing.