19-YR-OLD, WHO TESTED HIV-POSITIVE AFTER SHE WAS GANG-RAP£D, SEEKS JUSTICE 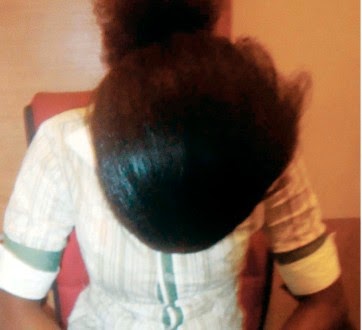 Found this story on The Nation. So heartbreaking. Read below...

Helen (surname withheld) will be 20 years on October 10. But she now bears a burden that is too heavy for her age. She was gang-r*ped in January this year and was diagnosed with HIV last month. Due to the heart-rending experience and the medical diagnosis that followed, the once cheerful and vivacious Helen now wears a long face as she carries with her the psychological burden of the experience.

After secondary school in 2008, Helen wanted to further her education, but being the fifth of 11 children comes with its own challenge. “Na the condition of no money, na im prevent me from going further,” said Helen when asked why she had not bothered to continue her education.

Despite her background, Helen was unperturbed. Determined that she would return to school some day, she began working as a cleaner in a big firm at Lekki, Lagos, from where she hoped to save for school. She had worked there for almost a year before the tragic episode that altered her life dramatically took place. It was with a deep emotion that she recounted her ordeal.

All was quiet and the street lonely early that Tuesday morning when the unsuspecting lady set out from her Bariga home to resume her morning shift at work. It was at exactly 5:05am, the same time she often left home everyday to board a bus some streets away to Lagos Island. But that morning, something was not right. She noticed five young men lurking about as she got out of her street’s gate. On seeing their fearsome appearance, her heart skipped a beat.

Consumed by fear, her first instinct was to turn and run back into the street, but it was too late. She had been spotted. “They blocked and grabbed me. They pointed a gun at me and told me to be quiet and do everything they said I should do, or else they would harm me,” Helen said before she was overcome by emotion. After a short silence that seemed ages, she added: “I tried to shout but when I looked around and did not see anybody except those guys, I was so afraid and did as they said… They, then, carried me to one corner by the side of the street… (She bowed her head). They asked me to lie down.” Helen went silent again with head still bowed, to hold back tears. She said: “I begged them to release me, that I was on my way to work and that I didn’t have anything to offer them. They told me to shut up, saying they would waste me, if I didn’t like my life. I begged them to spare my life.” Her plea touched a member of the gang; he said she should be freed. But his statement fell on deaf ears, for Helen’s other attackers were determined to carry out their task to the letter. Fighting back tears, she said: “The others said he could leave if he wanted to; they then collected my handbag, my purse and the N5,000 inside with my two phones – one was in my hand. I used its torchlight; the other was in my Jeans pocket. They removed the phone, pulled off my trousers and started violating me (Silence)…They asked me to pull off my clothes. I begged them.”

Her face became contorted as the agony of the incident swelled her being. Helen became silent again. One could see she was fighting to hide several conflicting emotions as she recounted. “But was there no way you could have shouted for help?” the reporter asked in an attempt to douse the tension. “There was no way I could have shouted because there were five of them against only me… I was so scared. So, I just kept begging them to release me.” As her attackers were beginning to enjoy their violent act, they spotted another young man and lady walking towards them. Helen’s attackers also pounced on the couple, robbing them of their valuables at gunpoint. Two of them also r*ped the second lady. By that time, Helen’s eyes were already swollen, from her trauma and obvious helplessness in the hands of the crooks. The two men r*ped the girl while the other three continued raping me,” she said in a subdued voice. On how she felt when her violators had their turns, Helen, in tears, said: “I swallowed my scream, felt very bad and closed my eyes as each of them…(Silence). For my mind e be like say make I get knife take kill them, because it was a very painful thing to experience. Before they started, I had asked if they had c**doms but they said ‘No’. ‘’

After they finished, all I could think of was running to the hospital and getting some drugs or treatment that could wash everything away from my whole being: my physical body, heart, soul and all. (Again, she lapsed into another silence). I felt very bad and, somehow, dirty.” After the incident She ran back home to her sister. Both ladies cried in silence; they felt ashamed to share with neighbours what had happened. As if that was not enough, while nursing the psychological trauma of the assault she got, another shocker happened to her on the same day. Helen discovered that her violators were her neighbours. “I recognised them: two of them live opposite my house. Before that time, I did not notice them. I see them every day and cringe; I’m always in fear each time I see them,” she said. Three months after Besides the traumatic r*pe, Helen has fallen into a worrisome medical condition. Last month, she was diagnosed with HIV at the General Hospital where she was rushed to after she was r*ped. Before then, Helen said she had been “negative”, adding that she knew through a test she did some time back. “When I went there when it first happened, they asked me some questions, gave me some drugs and told me to come back after three months for more tests.

The three-month period lapsed last month. The hospital did the followup test and found that I have become HIV-’positive’. ‘’I felt bad, very bad; and I cried. In fact, the doctor tried to calm my mind; but I kept on crying that ‘I’m finished’. I wanted to take my life because I never expected this to happen to me. They told me life still goes on and that I can still live my life to the fullest. They say people with HIV are can be healthier than those who are negative with the help of drugs. Before I left the hospital, I cried and begged them to help me because I did not plan to live on drugs for rest of my life,” she said. With tears dripping freely and looking straight at the reporter as if to find answers on her face, she continued: “What kind of life can one live now? I feel so bad; I feel so weak and I am asking myself: what did I do wrong in this life to deserve this? What will happen to my dream of going to school? I have not been able to save for school, and I now am treating HIV.”

The news of her status has added more sadness to her family who were still recovering from the shock of her violation. “When my parents heard the news, they were very sad and they all cried,” Helen said amid tears. The 20-year-old has since turned an advocate, seeking justice against her attackers. After living in fear for months, the dread of the rapists forced her and her sister to relocate last weekend. The move has emboldened to seek for justice, feeling she is beyond their reach. “I want justice. I need help. I want those men to go to jail for what they did to me and perhaps many other ladies in the area. These people cannot be allowed to go free. Everybody knows them as thieves in the area; they do not go to work or school but just hang around all day doing nothing. Still nobody has done anything about it. It is almost as if they are using charms. Their father is a very aggressive landlord. I see them always and I’m always in fear; that’s why we packed out of the house last weekend. You won’t believe that till we packed, my attackers are still using my phone,” she said. Helen’s sister, Stella, who was also in her 20s, said the whole incident has left the family heart-broken. Stella, who learnt a comforting hand to her sister, said: “We felt so weak and very unhappy, but there is nothing else we can do but to support her and pray that those crooks would be m*de to pay and suffer for what they did to my sister.”