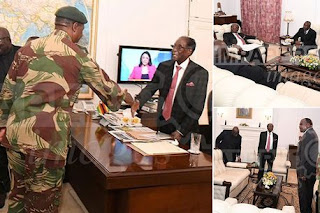 President Robert Mugabe has caused confusion during his address to Zimbabwe where it appeared that he has vowed to remain as head of state.

The dictator was expected to step down this evening after being given a deadline of 10am tomorrow to resign from his post.

But despite sources in Zimbabwe allegedly leaking information which suggested Mugabe was preparing to vacate the post, the 93-year-old leader did not step down.

Instead, he told the cameras that he would preside over congress in December where he said a range of issues within the party need to be addressed.


Now, the leader of Zimbabwe's war veterans said that plans to impeach President Robert Mugabe would go ahead as scheduled after the 93-year-old leader defied expectations.

Chris Mutsvangwa, who has been leading a campaign to oust Mugabe, is said to have told Reuters in a text message moments after Mugabe finished his speech that people would take to the streets of Harare on Wednesday.

In a statement on state TV, he said he was aware of a range of concerns citizens of the country have and that his people need peace, security, law and order.

He added that events of the past week show people are determined to resolve their differences peacefully but that they were not a threat to the constitution or his authority as head of state.