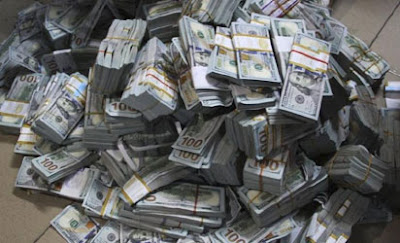 Claims for the estimated N850 million reward for the discovery of the Nigeria Intelligence Agency, NIA, cash haul deepened yesterday after the whistle-blower who unearthed the cash alleged a plot to dilute the money he was entitled to.

Speaking for the first time in an exclusive interview with Vanguard, the principal whistle blower, Stephen Sunday, also opened up on how he let two of his friends into the discovery. Sunday’s lawyer, Yakubu Galadima, who also spoke to Vanguard, said he was giving the authorities a deadline of the end of the month to pay the reward, failing which he would head to the court.

He also fumed against what he claimed as the emotional trauma the Economic and Financial Crimes Commission, EFCC, had subjected his client to, including administration of psychotic drugs.
Galadima alleged the drugs cost the EFCC a quarter of a million naira.


The controversy even deepened yesterday when it emerged that a legal firm which claims to be representing Sunday, and two others, Abdulmumin Musa and Bala Usman had petitioned Attorney-General of the Federation, AGF, Abubakar Malami to pay the money to the three men.

Sunday’s lawyer, however, disowned the firm, saying that he was not party to the petition, adding that he is the one representing Sunday and Usman. He disowned Musa but acknowledged a third person who he said yesterday he would not name.

The EFCC on its part said that it knows the real whistle blowers and that they would be paid in due course.

Speaking to Vanguard in an exclusive interview, Sunday’s lawyer, Galadima told Vanguard that his client first got to know of the cash haul sometime in 2016 following which he revealed it to one of his friends (names withheld), who he said wanted to organise a robbery on the property, a suggestion that Sunday firmly refused, leading to a fight in Obalende, Lagos.

Even there was a man that met me at the airport who said I should add his name. As far as I am concerned, if my client wants me to add the names of all Nigerians I will do so. But if he did not, I will not do that.

“My client was privy to the existence of the money. He informed his friend, (names withheld) who proposed that they should go and burgle the place. He even said that he would arrange a group of robbers that would assist in burgling the place, adding that no organisation can trace them. This man even fought my client in Obalende and injured him. There is nothing like additional six people, all those things are sham. Everything happened in my presence. So, no one can contradict what I know.

“In fact, I spoke with CNN this afternoon (yesterday) on the matter. Forget about the stories they are carrying about, if at the end of the month, they don’t pay my client, I will take the next action. If they had burgled the place, would they have seen the money? It is wrong to make a promise that will not be fulfilled. You can imagine the trauma that my client has gone through since April. I have relocated him to different states because his life is in danger. “I am doing all these just to protect him. When they approached me that they wanted to burgle the place, I advised them against it, saying that there is a window which is the Whistle-blower Policy that could be explored. If the boy was mad, would he have had the sense to tell the first person about it? He was not mad when he took them to the place where the money is. It is wrong for them to say that he is mad now after he has helped in unravelling the money.

“The EFCC told me that they spent N250,000 on the purchase of drugs for my client. They kept him in the hospital and were giving him injections. Who would experience that and will not feel traumatised? In this country, anyone that does not have anybody is in trouble. That is what is happening.”