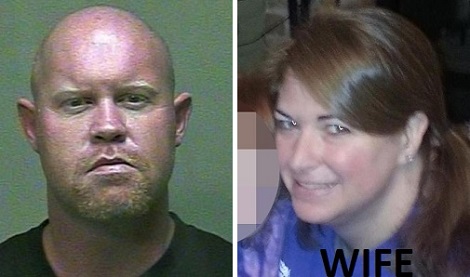 Kinney and Erin Glasson had been married almost a decade and had a young daughter. Kinney was still a romantic, and not shy of expressing his feelings. A recorded phone call he made in November 2014 was heartfelt and full of emotion.

"I want you to be with me every night. I don’t want anybody or anything else," Kinney told the woman he adored. "Honey, I love you more than anything in this world."

The only problem was, that conversation wasn’t with his wife – it was with his stripper mistress Reva, who was in prison on minor driving charges. Kinney had promised Reva that when she got out of prison, Erin would no longer ‘be in the picture’
.

Hardware salesman Kinney J Glasson Jr, 36, lived in Oklahoma City with Erin, 41, and their five-year-old daughter. They were a normal family – but Kinney had a weakness for strip clubs.

In July 2014, Kinney met Reva Ann Smith – a dancer who performed under the name Heaven – in the Double D Saloon in Oklahoma City.

After Kinney bought Reva jewellery for her birthday, they started dating. At first, Kinney didn’t tell Reva he was married. The pair had sex in motel rooms, and Kinney started to pay Reva’s rent and bills, as well as buying her clothes and promising her holidays.

Not only was Kinney lying to his wife, he was telling tall stories to his mistress too. He said he was in the FBI and even showed her a fake badge. When he finally admitted he was actually married, he pretended his daughter was adopted and that he was in the process of getting a divorce that would be finalised in January 2015. At his request, Reva quit working at the strip club, and they went shopping for engagement rings.

Then, in the early hours of 19 November, emergency services were called to the Glassons’ home. When police arrived, they discovered Erin was dead from a gunshot wound to the back. She was lying in bed. Their five-year-old daughter was in the house but unharmed.

Kinney told police he had been asleep with his wife until he was disturbed at around 3am by the presence of an unknown man in the bedroom. Kinney grabbed his pistol from under the mattress and pointed it at the man, then the intruder pushed his arm down, causing the pistol to fire in the direction of Erin who was still asleep. As the man ran from the room, Kinney said he fired a single shot towards the bedroom door.

But investigators discovered the bullet trajectories just weren’t consistent with his story and there was no sign of a break-in. Kinney admitted he’d been having an affair, but said he’d only continued with it out of fear that Reva would tell his wife, and that he was relieved Reva was in prison.

At the trial, the prosecution said Kinney had deliberately killed his wife so he could be with his girlfriend who he was ‘madly in love’ with.

They pointed out that unknown DNA was found on the weapon, but prosecutors also reminded the jury there was no evidence of a burglary and that DNA could have come from any time.

‘Kinney Glasson lived a double life,’ they said. ‘But then something happened where he was not able to run those two parallel lives any more. He fell in love with Reva Ann Smith.’

Reva took the stand and talked about the lies Kinney had told her, including false claims that his daughter was adopted. But she added that despite the fact they had sex in motels, their relationship was ‘romantic’.

But the prosecution said he’d shown his wife no mercy, and the judge agreed. He matched the punishment chosen by the jurors – life in prison. Kinney would be eligible for parole in his mid-70s.

Erin’s sister, Cynthia Canan, who is now raising Erin’s daughter, said, ‘I lost my first friend, my constant source of strength. There is a gaping hole in her absence.’

Kinney murdered his wife Erin in the same way he was having an affair – behind her back.