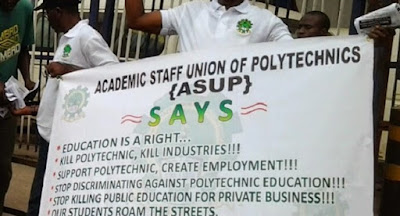 The Academic Staff Union of Polytechnics (ASUP) has announced its decision to embark on an indefinite strike with effect from Monday, November 13, 2017.

The decision was the outcome of the National Executive Council meeting of ASUP which held on Saturday at the Kaduna Polytechnic, Kaduna State.

According to them, the industrial action follows the failure of the Federal Government to implement all the agreements it entered with the union since 2016.

The union lamented that despite the long period given to the government to address some of the issues it had raised, government did not consider it necessary to address the demands for improved funding of polytechnic education in the country.