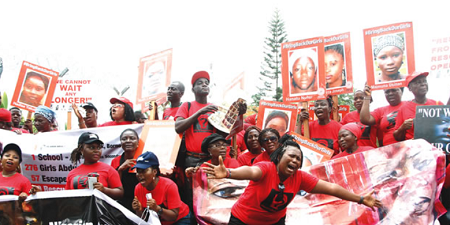 The BringBackOurGirls coalition will resume its daily protest march to the Presidential Villa, from Tuesday.

The movement said that nothing had been heard from the Federal Government since 82 of the Chibok schoolgirls abducted by Boko Haram were released in May, 2017.

The BBOG spokesman, Sesugh Akume, in a statement yesterday said it was now over 1,305 days since the abduction of the 113 girls that were still in custody of the insurgency group.

He explained that none of the commitments made by the government had been fulfilled, noting that President Muhammadu Buhari recently in his Independence Day broadcast on October 1 promised to ensure the release of the remaining girls, but this, the BBOG said, had not been done.