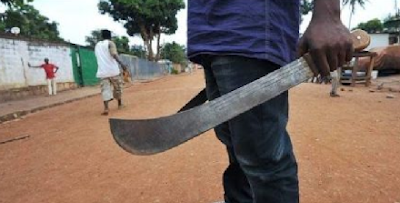 The Police in Bayelsa State have arrested a 24-year-old man, Vincent Edwin, for allegedly killing his wife, Joy, with a machete.

The incident reportedly occurred on Sunday night at Boro Camp, Kaiama, in Kolokuma/Opukuma Local Government Area of the state.

The deceased was said to have gone fishing in a nearby bush with her neighbour, Juliet Philip, when the husband allegedly attacked and killed her with a machete.

The motive behind the alleged killing has yet to be ascertained as at the time of filing this report.

Butswat said, “On November 5, 2017, at about 08:30hrs, one Edwin Vincent ‘M’ 24 years, a native of Uwheru in Ughelli North LGA, Delta State, but residing at Boro Camp, Kaima in Bayelsa State, attacked and killed his wife, one Joy Michael, 21 years old.

He said the suspect had been arrested and he had confessed to the crime.

Butswat added that investigation was ongoing.