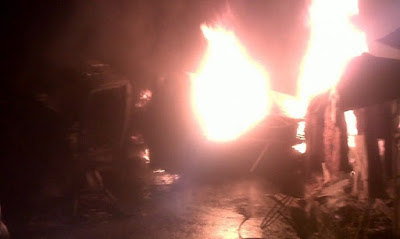 A 43-year-old father, Musa Mohammed, has been arrested by the Rights Protection Agency in Niger for setting his 15-year-old son, Bello Musa, ablaze.

Mariam Kolo, the Director-General of the agency, disclosed this in an interview with the News Agency of Nigeria on Tuesday in Minna.

She said that the incident occurred around Polytechnic Road, Bida, in Bida Local Government Area of the state.

Ms. Kolo explained that Mr. Musa tied the victim up and siphoned petrol from his motorcycle, poured it on the victim and set him on fire because of his alleged frequent quarrels with his elder brother.


According to her, the quick intervention of neighbours helped save the victim from being burnt to death.

“During questioning, the father confessed that his action was as a result of the behaviour of the boy, that he is always quarrelling with his elder brother and rude to him.

“He said that he was tired of the boy’s bad behaviour and had warned him several times to stop fighting his elder brother, but he refused to adhere to the warning,” she said.

The director-general said that the accused would be charged to court under Section 25 of the Child Rights Law and Sections 299 and 348 of the Panel Code Law.

She said that the victim is receiving treatment at Umaru Ndayako General Hospital, Bida.

Earlier, the father admitted to have poured petrol on his son and set him ablaze.

However, he pleaded with the agency for leniency, saying he committed the offence out of anger.