Bisola Is Too Old For Me –Jeff Akoh 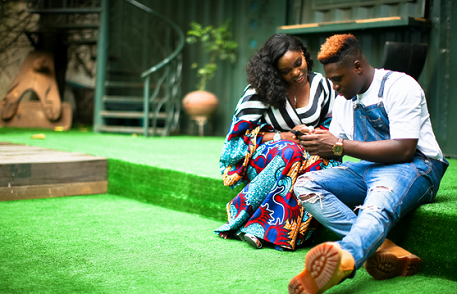 Although Big Brother Naija star, Bisola Aiyeola, has come out to deny being in a romantic relationship with 21-year-old Jeff Akoh, questions are still being asked. People are yet to accept it was just a publicity stunt as she later claimed.

Recall that 31-year-old Bisola went on Twitter to declare her love for  singer,Jeff Akoh. According to her, age wasn’t a barrier in their supposed romantic relationship. Some hours later, however, she rubbished her previous post, saying she did that to get the attention of the public.

When Sunday Scoop reached out to Jeff Akoh to ascertain the truth, he said there was no way he could have been in a romantic tie with someone who was much older than him.


The singer, who just released his debut album, Lokoja, said, “I was there when she made the post and it was funny. She made the post in the night and when I woke up the next morning, it was everywhere. But the truth is that she put her life on the line for me and I appreciate her for that.

“She just felt that way and put it on social media. She didn’t mean it and it is a free world where you can say whatever you want to say and do whatever you like.

“People apparently took it seriously; everyone has his or her opinion about life. I am not bothered a bit about that. The truth is she is not dating me; I am definitely too young for Bisola. She is more experienced than I am, so, we are not on the same pedestal. I can date someone older than me, but not by a 10-year difference,” he said.

The one-time Project Fame winner,  also insisted that his girlfriend was carried along, explaining that she didn’t panic when she read about his romance with Bisola on different news platforms.

Even without much singles or songs in the public, which is the norm in Nigeria, the 2015 Project Fame winner is confident that his album has all it takes to make an impact.

He stated, “Creativity should not be tampered with. I think it should be as natural as possible; it shouldn’t follow a trend. When it is as you feel, that is what makes it creativity.

“I am not worried that I didn’t have many singles before I dropped my debut album. I want people to listen to my songs. I just want the world to know me first as a musician before anything else.”