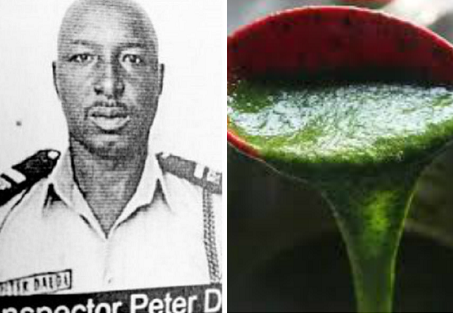 People in Dushai village along the Kagoro-Manchok road, in Kaura Local Government Area of Kaduna State are gripped by grief and wondering how a local staple vegetable, jute, (and known among the Yoruba of Southwest Nigeria as ewedu and called rama in Southern Kaduna), which they have been using to make soup for centuries could have caused the death of a whole family in their community.

The family five, including an unborn baby, as well as two domestic dogs, perished the next day after consuming a meal made with the vegetable. The dead were identified as ex-police inspector, Peter Dauda, 43, his expectant 35-year-old wife, Dorothy, nine-year-old son, Godwin and six-year-old daughter, Patience.

Sunday Sun learnt from a member of the community that the family had enjoyed their meal prepared with jute one night and went to bed. They woke up hale and hearty. Meanwhile before turning in that night, the used portion of the jute was spread on a container overnight. In the evening of that day, it was used to make a fresh pot of soup.


With no premonition, the family ate the soup went to bed, but never woke up again. The sumptuous vegetable soup allegedly killed them.

“The family had prepared and eaten the jute leaves in the evening of Wednesday, September 6, 2017 and went to bed without any problem. But the remaining leaves were spread on a container and preserved for consumption the following day.

“Trouble started on Thursday, September 7, shortly after they had eaten the vegetable soup. All the family members started complaining of stomach aches the following day, which was Friday, and neighbours rushed them to nearby hospital.

“The jute leaves was suspected to have been laced with a poisonous substance by unknown persons. The first family member to die was their six-year-old daughter, Patience, who gave up the same Friday, while Dorothy, Godwin and their father, Inspector Dauda, died on Saturday, September 9.”

The community leader said the whole village was thrown into mourning when news of the death of the family in suspicious circumstances was broken to them.

He described late Inspector Dauda as a hardworking and peace loving man who contributed in no small way to the development of Dushai community by preaching unity and love among the people.

Saddened by the news of the family’s death, Kaduna State Deputy Governor Barnabas Bantex paid a condolence visit to the community.

While in the community, Bantex appealed for calm, particularly from the youths and urged them shun any rumour relating to the death of members of the family.

“I am appealing to you to shun any rumour relating to the death of this family members because such rumour is capable of escalating the already charged atmosphere in your community,” Bantex said.  Bantex who hails from Kaura Council Area was accompanied on the condolence visit by top government functionaries as well as the sole administrators of Zango and Kaura councils.

The Deputy Governor used the opportunity to call on all communities in Southern Kaduna to assist government in sustaining the relative peace being enjoyed in the area.

In his reaction to the death of the family of five, Anglican Bishop of Kafanchan Diocese, Reverend Markus Dogo condoled the community and appealed to the people, “to commit everything to God and continue in fervent prayers for God to avert such incident future.”

Ewedu, also known as Jute leaf, is one of the most popular vegetables among the Yoruba people of the Southwestern part of Nigeria. However, it is also eaten among other tribes of the country. It is usually eaten with starchy foods like amala, eba, pounded yam and semovita.

Ewedu is a very good source of fibre, vitamins and minerals. It is low in calories and this makes it an excellent option for people that are trying to lose weight. Also, it serves as a source of lignin, an important raw material used in the textile industries.