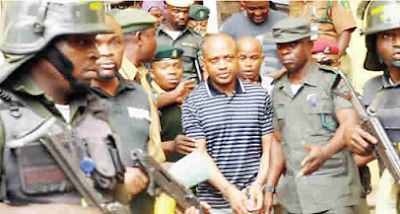 The Federal High Court in Lagos this morning entered judgment against the Nigeria Police Force in the fundamental rights enforcement suit filed by one Mr. Okwuchukwu Obiechina said to be the brother-in-law of alleged kidnap kingpin, Chukwudumeme Onwuamadike, alias Evans.

According to Punch, Justice Mohammed Idris, in a judgment on Monday, declared Obiechina’s arrest and detention and constitutional, holding that the remand order which the police claimed to have obtained from a magistrates’ court was invalid.

Apart from ordering the police to immediately release Obiechina unconditionally or charge him to court if they have any case against him, the court also awarded N2m damages in his favour against the police.

Justice Idris ordered the police to tender a public apology to Obiechina to be published in two national dailies.