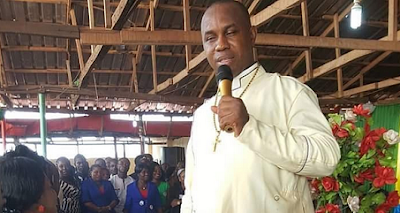 In a statement issued by the Enugu state police image marker, Ebere Amaraizu, it said the suspect, alongside others now at large, have been defrauding people through an alleged church opened for the crime in the area.

Bishop was said to have defrauded many unsuspecting victims of huge sums of money using his church located at KM 111 along Enugu / Port Harcourt express road in Enugu south local government area of the state. Amaraizu, in his statement said, “Bishop Ginika Obi recently arrested by the Enugu state command was charged to court where he was remanded in prison based on the 82 count charges.


“The said Bishop was formally arraigned on 11/10/17 before his Lordship Justice A. Liman of the Federal High Court 1 for offences ranging from conspiracy and advance free fraud which the suspect in collaboration with some others now at large perpetrated against victims with a view to helping to reap financial harvest by victims to pay various sums of money through the church.”

The accused bishop was remanded in prison custody as he was unable to meet the bail conditions of two sureties of a Director in Government Ministry and a traditional ruler from his community and the sum of 50 million Naira if he jumps bail.

His arraignment came as a result of discreet investigations carried out by the operatives of the commissioner of police Monitoring unit in Enugu anchored on several petitions against the suspect and others now at large on their alleged nefarious activities of swindling unsuspecting members of the public. Since the arrest of the suspect, Victims in their number have been trooping in and out of the office of the commissioner of police monitoring unit Enugu where the case was being handled with complaints/petitions bothering on what they said Bishop and his cohorts have done to them.