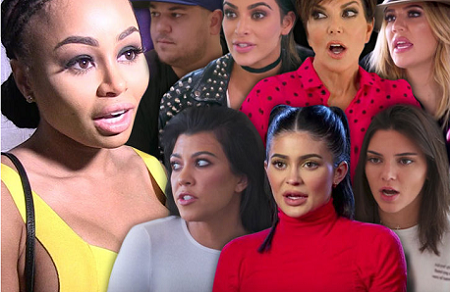 Blac Chyna is suing all of the Kardashian family, accusing them of damaging her brand and sabotaging her reality show with ex-fiancee Rob Kardashian.

The 29-year-old, who shares daughter Dream with Rob, claims the Kardashian clan has cost her a fortune after they interfered with the shooting of Rob & Chyna to the point E! pulled the plug.

She also alleges the nude photo scandal in July, when Rob, 30, went on a social media rampage against her, caused her 'significant damages' and also details the alleged verbal and physical abuse she suffered at the hands of Rob.

The lawsuit which People has obtained states: 'Rob Kardashian is an abuser intent on destroying Angela White, the mother of his baby, who left him in 2016.


'In revenge, the Kardashian-Jenner family became media predators, slut-shaming her on social media and killing her hit television show, which had already begun filming a second season.'

'Rob Kardashian and his powerful, vindictive family have done enough damage to Ms. White’s career and professional reputation, which she singlehandedly built from scratch—without the help of a famous last name. This lawsuit seeks to hold them accountable,' the lawsuit states.

The mother-of-two also claims that the 'power and influence' of the famous family got season two of her reality show axed.