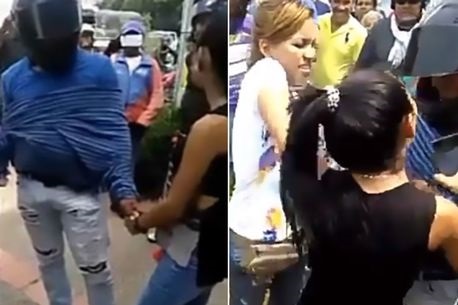 Two pregnant love rivals were filmed fighting over their cheating boyfriend - after discovering he was the father of both of their unborn children, it has been reported.

The two unnamed women came to blows while arguing in the street and exchanging heated words.

The man, dressed in a motorbike helmet, tried to separate them. According to local reports, the man has fathered both of their unborn children.

Local media reported that the man was hugging his girlfriend in the street when his secret lover stormed up to them.


She confronted the pair and revealed she, too, is pregnant with his child – brandishing a mobile phone and referring to text messages between herself and the man.

The woman claims that he has not responded since she told him she was pregnant.

This sparked a furious row between the women, and the girlfriend of the man tells her to have some "respect" as he has chosen to live with her.

The girlfriend said: "You are going to have a child with and I have child with him. And so?

"Will not you respect us? He lives with me, and he already told you that he will answer you. And so what?"

Police finally arrived on the scene and appeared to try and control the young women.

The motorcyclist, still wearing a helmet, seemed to be more concerned about protecting his identity than ensuring the two pregnant women do not harm one another.

The incident occurred in Valledupar in the north eastern Colombian department of Cesar. 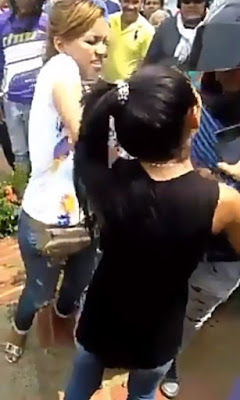 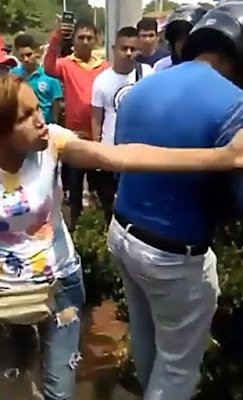