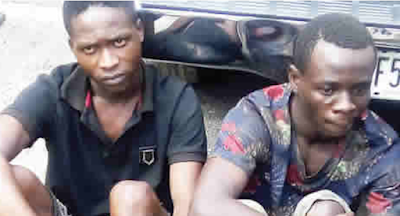 The police in Lagos are on the trail of one Chinedu, a resident of Ayobo, Lagos State, who led a six-man gang to rob his neighbour.

The victim was shot dead in the operation. However, two members of the gang – Tobi Michael, 22, and 19-year-old Adigun Gbolahan – had been arrested.

Two single-barrelled guns and charms were reportedly recovered from them. Punch Metro learnt that apart from Ayobo, the gang terrorised Ijanikin and Igando areas of the state.

The duo owned up to the crime when they were paraded on Wednesday at the Lagos State Police Command headquarters in Ikeja.


Michael, an indigene of Ilesa, Osun State, said he went into robbery last year after he completed his apprenticeship in furniture making.

He said he bought the gun he used for operation from one Awala in Alaba Rago for N15,000.

He said, “A friend called Bigi introduced me to robbery after I finished learning furniture making. I made between N30,000 and N50,000 from each operation. I had participated in about 20 operations.

“In July 2017, Chinedu led us to his neighbour in Ayobo. When we got there, he stayed outside, while Adigun (Gbolahan) and I entered. When we asked the man to give us money and his mobile phones, he brought out a cutlass and hit me on the head. I got angry and shot him dead. I was drinking at a joint in Alaba Rago when Bigi led policemen to arrest me.”

Michael added that the charms were meant to ensure successful operations and create fear in the minds of victims.

His accomplice, Gbolahan, who hails from Ibadan, Oyo State, said he used to work with another gang, but was invited to the Ayobo operation by Michael.

He said, “I live in a ghetto in Alaba Rago. I just completed training in tailoring and I needed money for graduation. We were three in my gang. Two of them had been arrested and they are in Kirikiri prison.

“I followed Tobi (Michael) and gang members to Ayobo, but I did not carry a gun.”

The state Acting Commissioner of Police, Edgar Imohimi, who paraded the suspects, stated that they were among 40 suspected armed robbers and cult members arrested across the state.

He said the hideout of a 10-man robbery gang led by one Ayinla Azeez, was busted in the Egbin area, Ijede, Ikorodu, on October 8, 2017, by operatives of the Special Anti-Robbery Squad of the command.

He added, “The command once again appeals to Lagos residents to be vigilant to make the state safe and secure.”