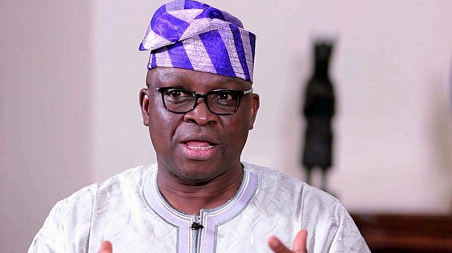 The Ekiti State government on Monday called on the Economic and Financial Crimes Commission, EFCC, to charge its Commissioner for Finance, Toyin Ojo, and
Accountant General, Yemisi Owolabi, to court instead of detaining them indefinitely.

The two officials were arrested by the commission on September 28, the same day the Ekiti State governor, Ayo Fayose, officially launched his campaign to become president on the platform of the Peoples Democratic Party.

The commission said they had cases to answer on the administration of the bailout funds given to the state by the federal government.

The Commissioner for Information, Lanre Ogunsuyi, who briefed journalists on Monday after the state executive council meeting, said the detention of two officials was an “abuse of power” and “a witch-hunt.”


He said the arrest was also a violation of a subsisting ruling of a court of competent
jurisdiction restraining the supposed anti-graft body from inviting or arresting officials of the state.

He said the state government was calling on the EFCC to respect the rule of law by abiding by the subsisting court ruling.

He said the options available to EFCC was to either grant the arrested state officials administrative bail or charge them to court if they had breached the law.