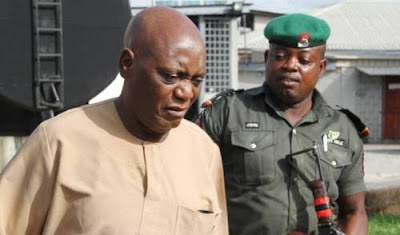 One of the former officials of Independent National Electoral Commission (INEC) being tried for alleged unlawful gratification, Christian Nwosu, has told the Federal High Court in Ikoyi, Lagos that he benefited N30 million from a former Minister of Petroleum, Mrs. Diezani Alison-Madueke.

However, when the counsel to the Economic and Financial Crimes Commission (EFCC) asked further questions regarding the alleged bribe, the retired  INEC Administrative Secretary in Kwara state, added that although he benefited N30 million but “not directly”.

Nwosu who was being cross-examined before Justice Mohammed Idris accused the anti-graft agency of forcibly extracting from him statements that indicted him in the allegation of bribery, adding that he was also coerced by the operatives of the commission to surrender his property worth N30 million and N5 million cash.


In his testimony during cross-examination, the embattled former INEC staff said an operative of the EFCC, Usman Zakari, threatened to hold him in detention if he refused to write in his statement what the operative would “like to hear”.

He said once Zakari was able to get him to say that he collected N30 million, he also dictated to him to write same in his statement. Nwosu went further to say that the operatives of EFCC in company of two armed mobile police then escorted him to the bank where he made a draft of N4 million in the name of EFCC before he was allowed his freedom.

“On the 28 of December, I was invited to EFCC, interviewed by one Mr. Moses and I made statements. He was about to let me go but he said his boss will want to see me. When Mr. Zakari came and read my statement, he said no, I have not written what he wants to hear and that he has signed my detention order form and was going to detain me and that even if I bring 10 lawyers, they won’t help me except I write what he dictate to me, he was going to keep me.

“He told me that Adedoyin had admitted collecting N28million and was released; that being a senior officer, there was no way I wouldn't have not have benefitted by collecting up to N30million (sic). He said unless I stated that I benefitted N30million, he would dump me in the cell. I quickly told him I benefitted. He dictated to me that I should write it; I did.”

Nwosu said Zakari also asked him to bring another draft of N1 million which made the cash collected from him N5 million.

The Nwosu also claimed that EFCC prosecutor, Rotimi Oyedepo, instructed Zakari to keep him in detention.

He said; “I knelt before Rotimi and he said: ‘Baba get up; I’ll only advice you to cooperates with us. He said he would not want me to go through the stress of litigation. He asked if I had landed property and cars. He said I should write out the property worth N30million that I had. He said he would ensure that I was convicted and jailed at all cost if I didn’t cooperate.”

However, Zakari disputed the claims that Nwosu’s statement was collected under duress or through any form of inducement. He said he took a risk by granting Nwosu bail on self-recognizance when the elderly man pleaded with him that he had no one in Lagos that can stand surety for him.

“Mr. Christian Nwosu was invited to our office on December 28 2016. I had an interview with Mr. Nwosu in respect of the charge before this court and he volunteered the statement. Before the statement, he was asked if he needed a lawyer which he said he was comfortable to write a statement. At the end of volunteering his statement, he was given a bail condition to produce surety to take him on bail. The defendant pleaded with me that he does not know anybody in Lagos and based on that and because it was 3 days to new year, I took a risk, gave him bail on self-recognizance.” Zakari said.

Zakari told the court that on three different occasions, he “took the risk of granting Nwosu bail on self-recognizance. However, he had to detain him on his last visit to the EFCC’s office because a charge had already been preferred against him and he had the duty to produce him in court.

Nwosu’s lawyer had contested the voluntariness of his statement when prosecutors sought to tender same in court as evidence in the case. He said his client was he was coerced, and induced by the commission to make the statement that indicted him on the charge. The allegation made the court to order for a trial within a trial to ascertain the voluntariness of Nwosu’s statement.

Nwosu was said to have received the money as part of a N23 billion bribe allegedly handed by a former Minister of Petroleum Resources Diezani Alison-Madueke, to some officers of the Independent National Electoral Commission (INEC).

The accused and the third defendant, Yisa Adedoyin, had earlier pleaded guilty to collecting the money, and sought for a plea bargain arrangement with EFCC. However, Nwosu dumped the plea bargain agreement when he judge’s rejection of the terms of the agreement.

Adedoyin went ahead with the plea bargain, pleaded guilty to one of the counts of receiving N70 million from Alison-Madueke’s alleged bribe and was sentenced accordingly.

Nwosu was re-arraigned alongside another INEC staff, Tijani Bashir, on an amended six-count charge bordering on receiving gratification to the tune of N265 million.