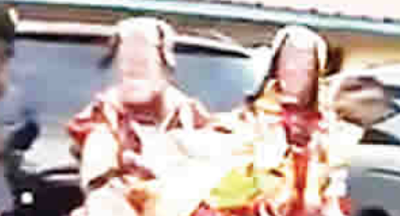 The police in Lagos State have arrested two masqueraders in their costumes, as well as their handlers, in Elere, in the Agege area of the state.

The Acting Commissioner of Police in the state, Edgal Imohimi, in a video that trended on the Internet on Wednesday, accused the masqueraders and their handlers of harassing and robbing the residents of the area.

He said the residents made distress calls to the police that some hoodlums were harassing and dispossessing some of them of their valuables, prompting him to call the Divisional Police Officer in charge of Elere division to effect the arrest of the masqueraders and others involves in the alleged crime.


Edgal, in the video, said the masqueraders and others were arrested about 4pm on Tuesday.

He said, “When I received the complaint against the masqueraders, I called the DPO and some decoy teams were sent to the area and the masquerades and their handlers were all arrested.

“We have warned repeatedly that people without purpose parading themselves as masqueraders on the streets of Lagos will no longer be tolerated.”

Edgal warned that any masquerader who came out without permission would be arrested.

“These ones will be de-robed and charged to court,” he added.

Some residents told Punch correspondents on the telephone that the masqueraders and some hoodlums were indeed harassing people, which prompted the distress calls to the police.

They said the masquerades were later taken away by the police in a Toyota Hilux. They stated that some of their handled were also rounded up and whisked away.

The state Police Public Relations Officer, ASP Olarinde Famous-Cole, while commenting on the video, said the masquerades were robbing motorists and causing breach of the peace.

He said they would be charged to court after investigation. He said, “The CP got a distress call that some hoodlums were fighting and almost caused the breakdown of law and order. Operatives of the command were mobilised to the scene, where we saw the masquerades intimidating and robbing passersby and motorists.

“They engaged the police in a fight and we had to call for reinforcement.

“All of them were picked up. They are about seven in number, including their leader.”