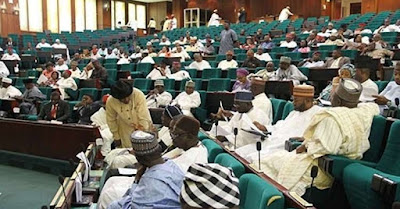 The House of Representatives Committee on Public Petitions on Tuesday issued an arrest warrant against the Acting Chairman of the Economic and Financial Crimes Commission, Mr. Ibrahim Magu, for refusing to appear before it.

The committee had, several times, invited Magu to appear before it on a petition by former first lady, Mrs. Patience Jonathan.

It said that Magu should be arrested and presented before it on November 7, after his failure to appear before the panel despite several invitations.


Mrs. Jonathan had some of her accounts frozen by some banks following an investigation launched by the EFCC; but a Federal High Court sitting in Lagos ordered that all her bank accounts should be unfrozen.

The former first lady consequently sent a petition to the House against the EFCC, the National Drug Law Enforcement Agency, among others, alleging harassment from them.

At the continuation of sitting on the petition in Abuja, the committee, which gave Magu up to October 4 to appear, lamented that the EFCC chairman was nonchalant concerning the matter.

The panel, chaired by Rep Uzoma Nkem-Abonta (Abia-PDP), said it had sent several letters inviting the EFCC chairman to appear before it and clear the air on the directive the commission gave some banks to freeze Mrs. Jonathan’s accounts.

A member of the committee, Rep Kingsley Chinda ( PDP-Rivers), consequently moved that a bench warrant be issued against Magu to appear before the panel on the next adjourned date.

All the members of the committee present at the sitting supported the motion.

The chairman of the committee then ruled that a bench warrant be issued against Magu.

Meanwhile, the committee has directed Mrs. Jonathan’s lawyers to sit with the management of Zenith Bank, Eco Bank, First Bank and Fidelity Bank to address the issue of the court order asking the banks to unfreeze her accounts.

The committee also discharged Union Bank as it fully complied with an earlier directive to unfreeze Mrs. Jonathan’s accounts.

The committee had, a fortnight ago, directed all the affected banks to unfreeze Mrs. Jonathan’s bank accounts that do not have any pending court orders or official communication from the EFCC to do so.