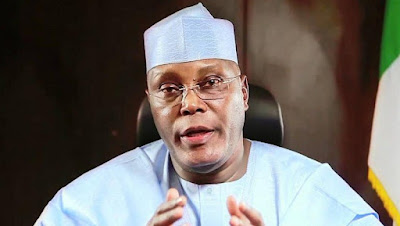 Former Vice president, Atiku Abubakar, has expressed shock over an online report that one of the freed Chibok girls attempted suicide to prevent being enrolled in his school, ABTI academy.

An online media had reported that Lugwa Sanda, one of the girls released from Boko Haram captivity, drank a liquid stain remover known as Jik to prevent the government’s decision to make her attend the school.


Quoting sources, the media alleged that most of the girls were opposed to going to the school owing to recent attacks in parts of Adamawa State where the school is located.

Reacting through a statement by his media adviser, Paul Ibe, Mr. Abubakar said he was “not aware anyone is forced to attend ABTI schools”.

“Atiku, the founder of the AUN Group of Schools, is shocked that some would-be journalists think it is fair game to exploit a young girl’s trauma to score cheap political points.

“Atiku Abubakar is not aware that anyone is forced to attend ABTI Schools. The story is contrived hogwash. He urges the media, a critical partner in our march to progress and development, to remember that not everything is about 2019.

“I wish to stress that the intention of the Waziri Adamawa was to give the freed Chibok girls (just like he did to an earlier batch in 2014) the best possible education, and that was why he helped set up the foundation programme to create such an opportunity in a familiar environment.

“Unfortunately, the best intentions can backfire. These girls are still healing, and clearly, the recent deterioration of the security situation in the North East has opened old wounds,” the statement reads.

Mr. Abubakar also charged the federal government to urgently fulfill its promise of providing adequate security for all Nigerians.

“The Waziri Adamawa prays that those who have suffered so much get all the treatment and support they need, and urgently calls on the Federal Government to honour its promise to make Nigerians feel safe again.”