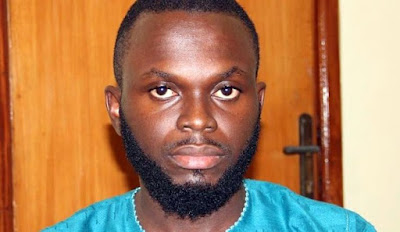 The 30-year-old suspect, a graduate of Computer and Information Science, was arrested in Lagos, following intelligence report.

The release signed by the commission’s spokesperson, Wilson Uwujaren, said sometime in January this year, the suspect, who owns Canbit Music, Canbit Resources (Nig.) Limited, Istartup Enterprise and Volta Company, allegedly sent an email to an employee of an American company requesting for the W-2s of the staff.


”The W-2 form shows the reports of an employee’s annual wages and the amount of taxes withheld from his or her paycheque, which an employer sends to his or her employees and the Internal Revenue Services, IRS.

”The suspect, who impersonated the Chief Executive Officer, CEO, of the American company, was alleged to have received 790 ( Seven Hundred and Ninety) W-2s from the staff, which he sold to some anonymous buyers in the ‘dark world’.

”The ‘dark world’ is an illegal method of cash remittance across countries and does not involve physical movement of cash”, the statement said.

Mr. Oluseun, who is also being investigated for Business E-mail Compromise, BEC, was allegedly paid with e-currency such as bitcoins and perfect money.

Also, the suspect was alleged to have printed some American bank cheques, which he presented as evidence of payment to his victims online.

Investigation revealed that ‘Ijobak is a new type of phishing, which attempts to lure human resources, accounting and payroll staff of a company to disclose the W- 2s of all the employees in the company.

The suspect will soon be charged to court after the investigation is concluded.