RRS Nabs Cleaner Over N500M Fraud, But He Explains His Role [Photo] 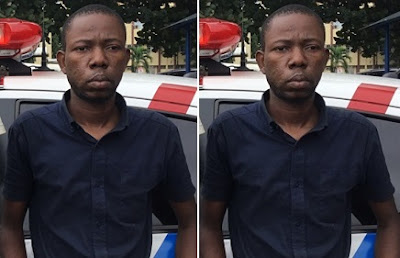 The operatives of Rapid Response Squad, RRS of the Lagos State Police Command have arrested a 30 year old hotel cleaner for defrauding a company of N2 million and attempting to collect another N500 million after hacking into the company’s e-mail address.

The suspect, Ahuja Sylvester was on Friday picked up by operatives in 911 Hotel, Warri, Delta State.

The suspect had sometime in April 2017, hacked into the e-mail of a Lagos based company, posing as the Managing Director and instructing the firm’s accountant to disburse the sum of N2 million into the Access Bank account of the suspect.

The suspect, using the same approach in June 2017, again requested the payment of N500 million into a Zenith Bank account. The company detected this and quickly alerted the police.


The RRS Decoy team in their investigations discovered that the initial N2 million was withdrawn with a debit card belonging to Ahuja Sylvester.

Ahuja, in his statement to the police denied hacking into the account of any company, stressing that his friend, who he named Emmanuel was the culprit.

He stated that he met Emmanuel, a National Youth Service Corp at his work place in April, 2017.

According to him, “Emmanuel, a Youth Service Corp member serving in Warri told me around April, 2017, that he was stranded and that somebody was going to send money to him. He requested that I allowed him use my ATM card because he couldn’t locate his own. I released it to him with my PIN. He told me that I should alert him whenever I received credit alert on my phone and I did.

“I expected these transactions to have been completed after two days. After almost a week, I saw him and I requested for my ATM, he told me he was still using it.”

He explained further, “after that, I asked him again and he told me that he had misplaced it. That was how he didn’t return the debit card again. My salary came and I approached the bank. That was when I was told my account was having issues. This was the moment I got to know my Account was used for fraudulent transactions.

“Since the episode, I have not been able to trace Emmanuel. I was informed when I started haunting him that he was out of Warri.”

Confirming the arrest, Lagos State Police PRO, ASP Olarinde Famous – Cole stated that investigation was on going and that the suspect has been transferred to SCID, Panti for further investigations.