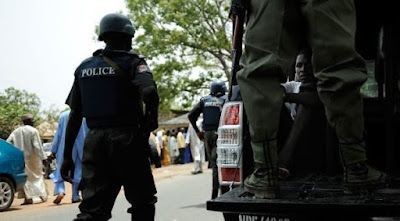 A man has been arrested in Abuja for setting a nine-room apartment on fire after his brother committed suicide.

The brother committed suicide after allegedly losing N7,000 he staked on sport betting.

Babatunde Bello, a 31-year old generator repairer, committed the arson at about 8.40 a.m on Saturday at the Bakery area of Kurudu, a satellite village in the Federal Capital Territory.

According to Simeone Chijoke, one of the tenants in the apartment, eight families apart from Mr. Bello lost all theirproperties as the fire spread swiftly and completely razed down the building.


The tragedy began on Wednesday evening when Babatunde’s brother, Ismaila, took seriously ill and started vomiting. He later confessed to have ingested rat poison because he was tired of life.

Ayobami Oni, a tenant in the neighbourhood who was an acquaintance of the Bello brothers, said co-tenants quickly gave Ismaila palm oil to drink as a heavy downpour at the time made it impossible to take him to an hospital for emergency medical care.

He said they, however, took him to the Karshi General Hospital early Thursday morning where he died at about 9 a.m.

The co-tenants said Babatunde was living alone in one of the rooms in the apartment until late 2015 when Ismaila, 33, arrived from Ibadan and the two brothers started living together.

At a point this year, the brothers quarreled and Ismaila, who was unemployed, had to temporary move out of the room.

According to Mr. Oni, one of the tenants, Mr. Chijoke, later introduced Ismaila to an hotel (Zuma Hotel) in Mararaba where he was engaged in the laundry section.

“After the hotel did not pay him for three months, he quit the job and I had to introduce him to a newspaper distributor who engaged him as a vendor,” said Mr. Chijoke.

“After Ismaila confessed to have taken rat poison on Wednesday, his brother refused to take part in our efforts tosave his life,” said Mr. Chijoke, who also runs a small provision shop attached to the razed building.

“He said Ismaila had decided to commit suicide because he had used N7,000 he realized from newspaper sales to playNaijabet and had no way of paying back the money to the newspaper distributor. He said we should leave Ismaila to die since that was what he had decided to do.

“However, after we returned from the hospital on Thursday and told him that Ismaila had died, Babatunde started crying,saying he felt responsibility for his elder brother’s suicide.

“When they took Ismaila’s remains for burial later on Thursday, Babatunde did not follow them.

“At about 8.40 a.m. however on Saturday, we suddenly noticed heavy smoke emitting from Babatunde’s room. We immediately saw tongues of fire and heard him shouting that we should remove our children from the house,” narrated Mr. Chijoke.

“Babatunde had doused his room in petrol and set fire to it. Everyone in the building scampered out because thicksmoke and fire quickly took over the whole house.

“I couldn’t even remove a pin from my room. I don’t have anything apart from this sport pant and singlet I am wearing,”Mr. Chijoke said.

Babajide Coker, the pastor of a church three houses from the apartment, said he was meeting with members of his church when he heard a commotion and all of them rushed towards the source.

“Two families who are members of my church live in the building. When I got there, the fire was all over the building and I saw some people trying to restrain Babatunde from running into the burning compound.

“We dragged him to the church but he was all the while trying to break loose. We took him into the children’s room, but when he grabbed the DVD Player and slammed it on his own head, shouting that he had to kill himself, we knew we had to quickly call in the police,” Mr. Coker said.

“A police officer living close by called his office on phone and we had to pin Babatunde down until officers arrived to take him away.”

He was later taken away to the Jikwoyi Police Station about two kilometres away from the scene of the incident.