How Lady Murdered By Lover Who Committed Suicide Swindled 3 Suitors 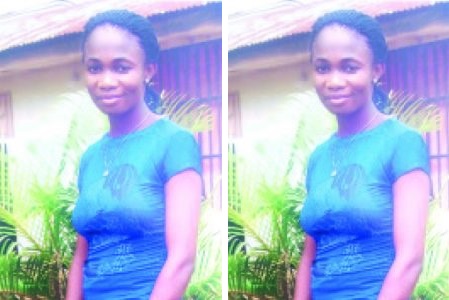 Fresh facts have emerged on the tragic death of 25-year-old Cynthia Nwafi, who was killed by her fiancé, Friday Njoku, 30, who then committed suicide after committing the crime. The incident happened on Friday, September 1, 2017, in Aguogboriga axis of Abakaliki, the Ebonyi State capital.

Sunday Sun learnt from a member of the local vigilance group that helped to convey Cynthia to the hospital before she died that she had been allegedly warned by some neighbours about her alleged inordinate relationship with men. They told a story of how she allegedly dumped her first fiancé who paid for her shop and bought some electronic devices.

“That girl had already disappointed the first man who wanted to marry her. It was that first man that paid for the container (shop) where she was sewing clothes and bought her a 20inch foam mattress, electronics and other home appliances.


“She was about dumping this one that killed her (Njoku) for a man who works in the National Obstetrics Fistula Centre, Federal Teaching Hospital, Abakaliki. In fact, I learnt that Njoku had warned that one to leave his girlfriend alone, saying that he had already taken palm wine to her family,” the vigilante told Sunday Sun.

“The first man, in anger, told her that she would dump another man in the same manner. She actually dumped that first man for this man that killed her. That man working in the hospital is very lucky. He could have been the one that Friday would have killed,” he narrated.

“The two of them quarrelled earlier in the day. Njoku swore to her that nobody else would marry her apart from himself. I learnt that the girl replied him that he was not serious. We learnt that the guy had met with her family, to declare his interest.

“On Wednesday, we learnt that Njoku and the hospital guy exchanged words. Njoku reportedly told him to steer clear off his fiancé. Then, on Thursday night, the guy killed both the girl and himself. We did further investigation and learnt that her landlord had warned her about Njoku, who he felt had a weird character,” the vigilante said.

According to a close source, the two lovebirds had been in a relationship for quite a time. Njoku was said to have taken wine to the parents and relatives of his girlfriend to indicate his intention to marry her and was accepted by Cynthia’s family. He was making arrangements to walk her down the aisle before the tragedy happened.

Sunday Sun gathered that Njoku, a day before killing his lover had accosted her parents and accused Cynthia of infidelity.

The Cynthia’s family denied the allegation that their daughter was unfaithful to her lover. Although they admitted that the late Njoku had made known his intention to marry Cynthia, their marriage had not been sealed, hence, he had no moral justification to lay claims to her.

Cynthia’s elder brother, Meshark Offia, who debunked the allegation of infidelity queried: “How could Friday say my sister was unfaithful when they were not living together, they were not legally married?”

Narrating what transpired, Offia said: “Around 1 O’Clock in the night, I got information that one Friday Njoku from Ebonyi Local Government Area stabbed my sister to death. I went to the state police headquarters, Abakaliki and reported the matter. I learnt that the assailant killed himself after stabbing my sister to death. I also went to the mortuary and saw his corpse. Friday Njoku was my sister’s fiancé. He had not actually concluded the marriage rites but he had brought drinks for us and the family accepted him, the girl also accepted him.

“The girl was living in her house and Friday was also living in his house. They had not been joined together as the tradition demands but we were all aware that Friday was Cynthia’s fiancé though he had not paid her bride price. Friday was a motorcycle operator; my sister a fashion designer.

“My sister and Friday were in good terms. Even, Friday came to my house a day before he killed my sister. How could Friday say my sister was unfaithful when they were not living together, they were not legally married?” Meshark added.

When the late Cynthia was rushed to the Federal Teaching Hospital, Abakaliki, FETHA, one of the security men told Sunday Sun that the doctors were allegedly reluctant to treat her. He said that the doctors had requested for police report before they could touch her. Sadly, Cynthia who had already lost much blood gave up the ghost on the hospital bed.

“FETHA requested for police extract before they could handle her. So by the time police arrived, she was already down. She lost a lot of blood.

“If you go to that hospital with that kind of wound, they would tell you to bring police extract and you should bring money while you come. It is not proper,” another member of the vigilance group said.

When contacted, the hospital management denied the allegation, describing it as baseless and unfounded. Speaking to Sunday Sun, the Deputy Chairman, Medical Advisory Committee, Dr Nnadozie Ugochukwu, said that doctors attended to the late Cynthia immediately.

Ugochukwu, who brandished late Cynthia’s medical folder, said: “Such a thing had never and would never happen in this hospital.

“That allegation is not true. You cannot die in FETHA because you don’t have money. In the first 24 hours of your presentation, definitely you’ll receive all levels of care. It does not matter what is needed so far it is available in the hospital.

“The primary essence of our hospital is to save life. When this report came it was strange. You can see on the folder, what is written here is ‘Not Yet Paid” he said.