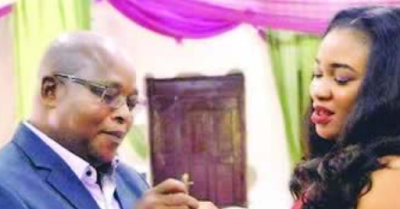 The family of Onyinye Eze, an employee of Globacom Nigeria Limited, allegedly murdered by her Australia returnee ‘husband’, Mr. Stephen Akpata, have described the suspect as a liar and swindler.

On August 16, 2017, Akpata, according to police records, an indigene of Delta State and popularly called Bishop because he reportedly administered a church, allegedly murdered his 33-year-old ‘wife.’

Onyinye was reportedly murdered by Akpata, who allegedly married her at a court registry in Bayelsa State a few months ago.

Police said the suspect, who had reportedly confessed to the crime, also confessed to serving various jail terms in Australia and was also involved as a witness or suspect in a certain murder case.


The police suspected that Akpata jumped bail and returned to Nigeria.

The suspect, said to have spent over 27 years in Australia, allegedly strangled his new wife with the cords of a pressing iron before stabbing her to death with a knife.

The incident was exposed when one of Onyinye’s colleagues at Glo, identified as Moses Awo, reported it at Ekeki Police Division in Yenagoa when the woman failed to report for work.

Awo had reportedly told the police that when he and another colleague visited Onyinye’s house, located behind Fido Water Company in Kpansia area of Yenagoa, they discovered that the apartment was locked, while a television was on loudly.

The authorities at Ekeki Police Divison sent some policemen to the deceased’s house. They forced the door open and found Onyinye lying dead in a pool of blood.

Akpata, the prime suspect in the murder, was later arrested by the police in Badagry, Lagos State, about two weeks after the discovery.

The elder brother and guardian of the deceased, Alex Eze, a Master Warrant Officer of the Nigerian Air Force, described Akpata as a ‘pathological liar, swindler and unrepentant criminal.’

Eze, who described Oyinye as the last child of their parents, claimed that the information Akpata supplied to the police about himself was untrue.

The distraught Eze said, “First, let me correct the impression that Akpata is 40 years old. I read some reports that the suspect is 40 years old. That is a lie. The man is in his in early 60s.

“The suspect’s daughter is between 29 and 30 years. He (Akpata) told me he stayed overseas for over 37 years. That is what he told me when he came to my house. The man is not only a liar, he is a deceiver and has a sugar-coated mouth.

“I want to tell you that the man has not given the police his actual details.”


Who is Stephen Akpata to the family?

Reports claimed that he was married to my sister, it is not true. They only met in June 2017. So, how could he marry our sister in June? What has he done concerning the marriage to make him our sister’s husband?

We learnt that they had a registry marriage about a month or two ago.

They did not do any court marriage. I do not know what he wants to achieve with such lies.

But there are photographs of both of them on the Internet holding a court certificate. What is your response to that?

She was not married to him. The pictures might have been taken in the house and posted on the Internet to deceive people that they were married. Even the shorts he wore in one of the pictures he took with my sister was the shorts we saw inside his house stained with blood, that is with the police. I am not aware they did any court marriage.

Did the man meet your family?

He only met me as the elder brother and guardian of the lady and asked me to give him a date. I gave him August 12, 2017 to do the first introduction to the family. He did not know my mother and my mother did not know him. How could he claim he was married to my sister?

Where are you people from?

Was he married before to any other woman?

He was married. He told me that his son was the manager of his companies based overseas. He equally claimed he had over 2,000 staff members working for him over there. That is to tell you the extent of his lies; I never knew it was a swindler I was dealing with. He told me then that he wanted the marriage ceremony to be done within three months and that by the end of September, he would like to take my sister with him to Australia. He was even asking my sister to resign from her work at Glo.

When he sought your consent to marry your sister, what did you do?

I did not object, knowing full well that my sister was a grown adult. I told him I would seek Onyinye’s consent and would not like to be a hindrance to their marriage. I gave him go-ahead with the marriage preparations.  I went to the village and told my kinsmen and they gave me a date.

Then we agreed on August 12 and September 2, 2017. The August 12 was for his first visit to the family, what we call ‘knocking of door’ or introduction. The September 2 was meant for the wine-carrying ceremony. These events did not hold for no reason. On  August 12, all of us including my sister (Onyinye) were in the village for the ceremonies, expecting him to come. He then called to say that he was kidnapped. My sister left the village for Bayelsa immediately. After my sister left for Bayelsa, Akpata called to tell me that he had been freed by his abductors and that he never knew Nigeria was such a bad place. He further said he had called my sister and that he was going to see her in her house in Yenagoa. He later called me that he was at home with my sister. I advised him to leave with her and come to Port Harcourt, so that the next day they would leave for Enugu in order to see my mother and other family members. He was thanking God for his release. He also thanked God for making him to see my sister, saying that my sister was God-sent to him.

To prove to me that he was truly with my sister, he enquired from me if I wanted to speak with her. I said yes, and I spoke with her. She confirmed that she was there with him and that they had agreed that they would go to Port Harcourt the following day as I advised them. I then advised him to remove his SIM card from his phone so that the kidnappers would not be able to track him with the line. He said all right.

On August 16, their lines were available in the morning. Two hours later, I called again, the two lines — his own and my sister’s own were switched off.  The development made me curious. I started calling all my sister’s friends.

I became worried. Later,  I was told that there was one of our town persons working with my sister in Glo office in Yenagoa. I called the man (Glo employee) and he told me my sister’s line was off. Akpata killed my sister that early morning of Wednesday, August 16. After killing her, he quietly went to the bathroom, cleaned up himself, changed his clothes and vamoosed from the house.

What did you do next?

When I called the Glo employee, he said he had sent somebody to my sister’s house but that the person met the door open and the burglary proof was locked from outside but the television was on loudly.

He said he informed a senior official of the telecom company what they observed at my sister’s apartment. Both of them went back and it was the same thing. They reported the development to the police. Meanwhile, we were communicating all this while and they were giving me situation report. They later called to inform me that I should give them permission to force the house open in company with the police. I agreed.

After sometime, I called them. They asked me whether I was her elder brother. I said yes. They said, please take heart, your sister is lying in a pool of blood.

The next day, being August 17, I came to Yenagoa and saw everything for myself. We even met his (Akpata’s) shorts and a pair of trainers he wore  stained with my sister’s blood with a stick of cigarette tucked into my sister’s body. That was what happened.

Tell us more about Akpata…

Prior to her death, did your sister receive any kind of threat from Akpata’s family members either in Nigeria or abroad?

Yes. At a point, the daughter working at NDU sent a threat message to my sister, which she showed me on the day she left for Yenagoa. She had received the threat message earlier but hid it from us. But on that day she was leaving for Yenagoa, she told me. She said, “Brother, see the letter I received from Stephen’s daughter threatening me to stay away from her father.’’

Why was Akpata’s daughter  threatening your sister?

From what I deduced from the threat message, Akpata’s daughter was against my sister’s relationship with her father. She swore that her father would not marry my sister and that her mother was still there.

We learnt that the wife was married to another man. The man (Akpata) had claimed earlier that he got his daughter out of wedlock and that he had other children overseas. He said he could no longer stay alone, claiming that the last time he had a woman in his life was in June 2012.

How would you describe your late sister?

She was the last child of my parents. She studied Philosophy at the University of Nigeria, Nsukka. She was 33 years. I brought her up from the beginning to the end. She stayed with me in Ikeja, Lagos. She did her National Youth Service Corps at Nigeria Emergency Management Agency.

What attributes would you miss about Onyinye?

She was a brilliant, intelligent, easy-going, quiet, kind-hearted and jovial person.

We will miss her greatly. She was the breadwinner of the family. She was taking care of many people in the family. Before she died, she placed my mother on N40,000 monthly upkeep. My mother has been crying since she died, saying her own is finished. Besides, she took the responsibility of paying tuition fees for many family members. I must say her death has created a big vacuum that we do not know how to fill it.

Are you satisfied with the police investigation?

We will pursue the matter  judicially till justice is served. Her death cannot be in vain.  So far, we are satisfied with what the police are doing. I also believe that since the matter has come to public consciousness, the relevant authorities will do the needful to ensure that justice is served.