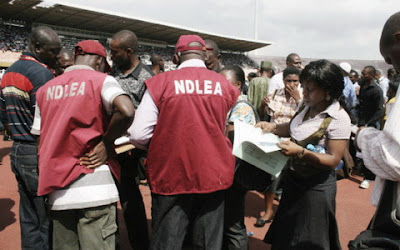 The Cross River Command of National Drugs Law Enforcement Agency on Friday said it has arrested six drug suspects including a blind man and a cripple in separate operations in the state.

The state Commander of the NDLEA, Mrs. Antonia Edeh, disclosed this in Calabar during a chat with journalists.

She said, “The command also made an arrest of 128.8 grams of crack cocaine transiting from Lagos to Calabar in the form of courier consignment. The receiver, Diyaolu Dare was arrested when he came to collect the consignment.

Edeh added that a cripple, Gabriel Aniefiok was found in possession of dried weed weighing 9.89kg suspected to be cannabis sativa at Big Iwuru in Biase LGA.

“Another suspect, a 70-year-old man named Joseph was also arrested in Ikot Ansa in Calabar Municipal LGA for being in possession of 1.83kg of weed suspected to cannabis sativa,” she stated.

Edeh expressed worry over the choice of using the physically challenged to perpetuate such nefarious activities, and advised parents to be vigilant and not to allow their wards  fall prey to illicit peddlers.

She enjoined the public to always avail the agency with useful information that would help in arresting suspects.

According to her, the suspects are undergoing investigation and will be charged to court when investigations are completed.