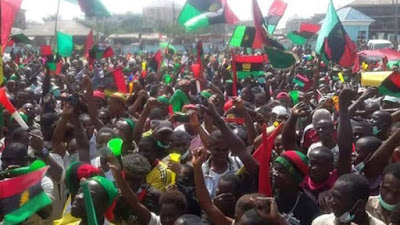 One person was feared dead, yesterday, at Ekwulobia in Aguata Local Government Area of Anambra State during a clash between security operatives and members of the Indigenous People of Biafra, IPOB.

The heavy presence of security operatives, including the police, the army and the navy, made the people wonder what was amiss, until they learned that the IPOB leader, Mazi Nnamdi Kanu, was scheduled to visit the area.

Several truck loads of security operatives were sighted at Upper Iweka in Onitsha and were said to be heading to Ekwulobia for reinforcement.

Despite the heavy presence of security operatives, the IPOB members were still seen parading major roads in the area, singing and waving Biafra flags.

An eye witness said security men confiscated the Biafran flags, caps, shirts and other items being sold by the youths, which apparently angered the IPOB members, who allegedly tried to attack the security operatives.

It was at this point, the eye witness said, the police used teargas to disperse them, adding that it was the stampede that led to the death of one person.

Though the State Police Public Relations Officer, PPRO, Mrs. Nkeiru Nwode, denied the death of any IPOB member, she confirmed that there was presence of security in the area, which was to avoid breach of peace.

She said: “The presence of the security men was to secure the place from being attacked by hoodlums. People should not take laws into their hands; the security operatives in Anambra are working day and night to secure the environment and are not ready to allow miscreants take over the society.”

While urging the people to go about their normal businesses as Anambra was secure, she insisted that security operatives would not hesitate to deal with anybody or group that tried to cause trouble.

Apparently due to the problem, Kanu was not seen in the area as at 4.00 pm, even as the security men were still patrolling the area.

Vanguard recalls that it was at the same Ekwulobia that suspected IPOB members tried to disrupt church service while Governor Willie Obiano was worshiping at St. Joseph’s Catholic Church in the area.