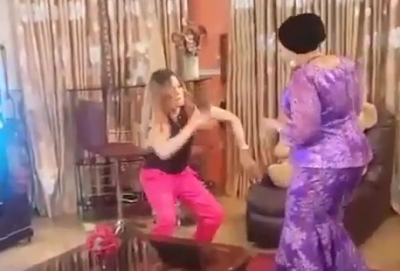 We told you this morning that Bobrisky has appeared in his first Nollywood movie- and it's a yoruba one titled Ojuloge.

Now, it has been revealed that the dude is playing a 'transgender' role and acting as veteran actress Lola Idije's son. In the movie, Lola Idije longs for a female child but got a son instead. She then started dressing him up as a female right from his childhood days. He grew up seeing himself as a girl and was living that life until he almost ended at a ritualist den. Lol, let's stop there so we won't let the whole cat out of the bag, lol. Guess it's a movie you should watch out for.