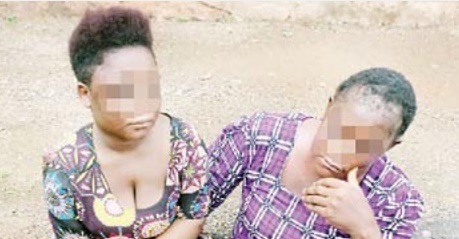 A 43-year-old woman, Alaba Mulika and her 16-year-old daughter, Olamide (surname withheld) have been arrested by the Ogun State Police Command for allegedly trading in cannabis.

The mother and daughter were dwarfs, and the Nigerian Tribune gathered that dwarfism runs in their families, as the woman’s mother, sister and others were also dwarfs.

This was just as a total of 56 suspects were paraded by the Ogun State Police Command on Thursday, with the Commissioner of Police, Ahmed Iliyasu, saying that various units of operatives had been deployed in different areas of the state to curtail kidnapping, robbery, cultism and other crimes.

Among those paraded were those arrested for murder, armed robbery, impersonation, cultism, car snatching, rape, fraud, among others.


Speaking on the arrest of the mother and daughter at the command’s headquarters at Eleweran, Abeokuta, Iliyasu said that Mulika had engaged in sale of the illicit drug for more than five years

Iliyasu said that on August 5, at about 10:00 a.m., operatives of Special Anti-Robbery Squad (SARS) got information about the sale of Indian hemp in Awa Ijebu, so they stormed the town and raided the suspects’ joint.

“On getting there, they found the woman and her daughter selling hemp, skunk and other drugs and arrested them with their exhibits,” he stated.

Nigerian Tribune learnt that Mulika was arrested by SARS about two years ago and handed over to the state command of the National Drug Law Enforcement Agency (NDLEA).

It was further gathered that the woman was once a visitor of the anti-drug agency before her arrest by SARS two years ago.