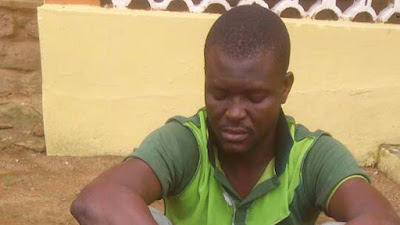 A thirty-five-year-old man, Bakare Olalekan, yesterday confessed to newsmen that he bought a human heart for N10,000 from his friend, he simply identified as Oye, for “good luck charm.”

Olalekan was among 55 other suspects that were paraded by the Ogun State Commissioner of Police, Ahmed Illiyasu, at the State Police Command Headquarters, Eleweran, in Abeokuta for various crimes. The crimes ranged from kidnappings, armed robbery, vandalism, burgling, ritual killing, cultism and impersonation.


His words: “He (Oye) later sold three human hearts to me and he used one of them to prepare the charm for me. I later sold the remaining two to a suspect who is also being detained.”

The Police Commissioner while giving breakdown of the various crimes the suspects committed, disclosed that Olalekan was part of a four-man syndicate that was arrested for killing a 16-year-old girl, Olayinka Adebayo, last year August.

Among the suspects was a fake naval officer, Abdullahi Hammed, a fake police officer, David Olasubomi, and a fake prophet, Kehinde Onanunga.A mother, Mulika Alaba and her 16-year-daughter, Olamide Saliu, were equally paraded for dealing in Indian hemp.

Furthermore, a man suspected to be an accomplice of a fake pastor has said he was contracted to kidnap a virgin girl for ritual purposes. During the police parade, an alleged fake pastor of a white garment church in Sagamu, Kehinde Onayiga, was alleged to have a hand in the killing of a 13-year-old girl, Anuoluwapo Ajisafe, for ritual purposes.

His alleged accomplice, Musiliu Jibril, reportedly lured the victim to Onayiga’s church where she was said to have been murdered. Jibril confessed to journalists that it was Onayiga who contracted him to source for a female virgin, who he wanted to use for ritual purpose, in preparing some fetish materials for some Internet fraudsters, popularly known as Yahoo boys.

“I was able to lure the girl because she knew me and the mother, too, knew me. I delivered the girl to him in his church at Sagamu. He promised to pay me N20,000, but I am yet to get the money.”