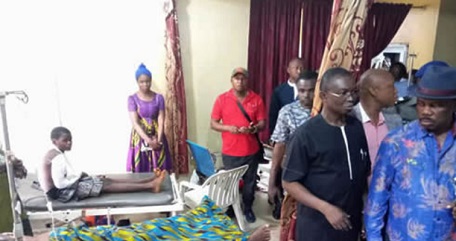 The Sunday devastating attack on the St. Phillip’s Catholic Church in Ozubulu, Anambra State, has left many families bereaved in the state, while a large number of Nigerians on Monday continued to express their displeasure.

This is coming as the death toll rose to 12 on Monday, while those injured climbed to 40 from 18.

The state Governor, Willie Obiano, in a Monday broadcast, described the attack as a gang war “imported into the Anambra State from abroad.”

One of the families affected is the Obunadikes, whose member, Joel Obunadike, lamented the death of three members.


He told one of Punch correspondents that his sister-in-law, the baby girl she was nursing, and his uncle lost their lives in the attack.

Obunadike said, “I lost my uncle and my brother’s wife, as well as her baby girl.  My brother’s wife was cuddling the baby when a bullet pierced through her back. The bullet killed her and the baby.

“We are still in shock. That’s all I can say for now.”

Also, it was gathered that one of the wives of the slain father of bishop (Aloysius Ikegwuonu, the alleged drug baron), Mrs. Caroline Ikegwuonu, was hit and had been admitted to a hospital in the area.

When The Punch sought her comment, she said, “Please I can’t talk now. I’m still in shock. Please leave me alone.”

Another victim, Samuel Ndulue, whose legs were shattered in the attack, said, “I was in the church, but before the sermon started, I heard a gunshot that sounded like a banger.

“When I looked up I saw one man with a gun.  I tried to escape from the east end of the church; but before I could do so, my two legs were shattered by bullets.

“I was later told that the gunman jumped into a vehicle after accomplishing his mission. I can’t understand the reason for the attack,’’ Ndulue stated.

A nurse at the Accident and Emergency Unit of the Nnamdi Azikiwe Teaching Hospital, Nnewi, who spoke to one of Punch correspondents on condition of anonymity, said four of the injured persons brought to the hospital on Sunday died on Monday while six had been referred to another hospital.

She said,” Four of them couldn’t make it, including a baby. Twenty two injured persons are still with us and they are responding to treatment,” the nurse added.