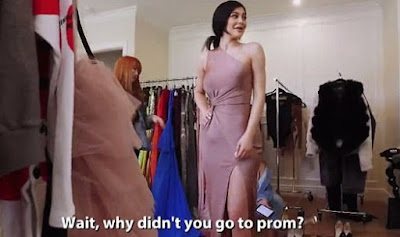 Kylie Jenner has an enviable career that includes the reality TV series Keeping Up With The Kardashians and a smash-hit makeup line.

But the 19-year-old pinup had to give up a lot to get where she is today. And during a teaser for her new show Life Of Kylie, which premieres on Sunday, the sister of Kim, Khloe and Kourtney Kardashian revealed she was not allowed to go to her high school prom.

The reason was because the sweetheart of Calabasas was being home schooled. 'It was really sad actually,' said the ex of Tyga. 'I had to un-follow all my friends that I went to school with.


'They probably all thought I hated them but I just couldn't see it, you know, because they would always post photos and they were all at the prom and I was like, "Can't see it." It really just made me sad.'

It is likely that if she had been asked by a student at her old high school then she could have attended, but that is not explained.


Her sister Kendall, 21, did attend high school as did all of her half siblings including Kim, Kourtney, Khloe (who was later home schooled) and Rob. Kourtney was the only one to graduate from college.