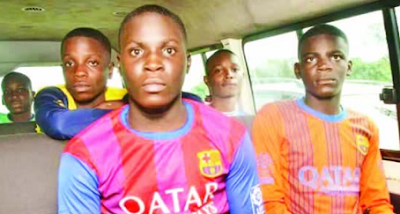 Therapeutic treatment for the freed six pupils of the Lagos State Model College, Igbonla, Epe, have commenced to relieve them of the trauma of their captivity.

The children were debriefed for about four hours on Monday at the Lagos State University Teaching Hospital, Ikeja.

Their parents were not allowed access to the session reportedly organised by a team of psychologists and other medical experts.


They were reunited with their parents in Lagos later in the day and taken to LASUTH, where their blood samples were collected for medical examinations.

One of the freed pupils, in an interview with Punch correspondent on Saturday, had described his stay in the kidnappers’ hideouts as a bad experience, saying they bathed once in a week, slept in the rain and went hungry all day on a few occasions.

On Monday, the children returned to LASUTH for another round of medical examinations to ascertain their health condition.

Punch Metro learnt that a history of their experience in the kidnappers’ den was also taken by the medical experts, who took them though a trauma therapy, which lasted for over four hours.

Parents contacted by Punch correspondent after the exercise said they had been strictly warned not to allow the children speak to the press.

A mother, who begged not to ne named, said, “They underwent examinations to make sure that nothing happens to them now and in the future. The hospital is helping them. They spent over four hours with doctors.

“They said they would still call us, but they didn’t give us any specific date. The results of the tests are not out. We were advised not to allow them speak with anybody on the incident, especially journalists. If you want more information, go to the appropriate authorities.”

Another parent said the exercise focused on assisting the pupils to get over the shock and relate well with their environment after 64 days in captivity.

He said, “The hospital debriefed them. They tried to liberate them from the trauma and make them be themselves again. They want to bring them close to the environment. There is no strange behaviour noticed for now.”

Calls put across to the line of the LASUTH Chief Medical Director, Prof. Adewale Oke, rang out. He had also yet to reply to enquiries on the debriefing and medical tests conducted on the pupils as of press time.