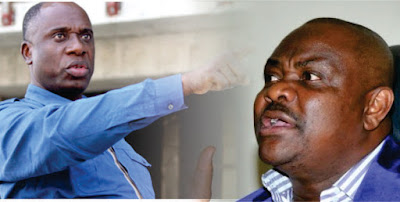 The Minister of Transportation and immediate past governor of Rivers State, Mr. Rotimi Amaechi, has accused Governor Nyesom Wike, of forging more documents to persecute him.

Amaechi claimed that Wike wanted to use the distorted and forged documents to persecute and prosecute him in court, adding that the governor had bragged that he would secure judgement against him in any court because he had the judiciary at the state and national levels in his (Wike) pocket.

The former governor, in a statement by his Media Office, said, “The Rivers State Governor, Nyesom Wike, has continued to twist, falsify and forge fresh documents that he intends to use against the immediate past governor of the state and now Minister of Transportation Rt. Hon. Chibuike Rotimi Amaechi.


“Wike wants to use the elaborately distorted and most times outright, but carefully forged documents to persecute and prosecute his erstwhile benefactor in court. In the past couple of days, Wike has been telling anyone who cares to listen, bragging that he will certainly get a conviction, a judgement against Amaechi in the law courts on spurious charges of corruption using his forged documents because he (Wike) is in control of the judiciary at the state and national level.

“Nigerians would recall that only a few days back, Livingstone Wechie, the young man Wike used to accuse Amaechi of corruption and write false and frivolous petitions to the National Assembly and the EFCC etc, confessed in a live television programme and in a statement he also circulated to the media, that all the documents he used to wrongfully portray Amaechi as corrupt when he governed Rivers State, were phony, forged documents given to him by Wike’s Rivers State Government House.

“Wechie also admitted, like we have always said, that the forged documents were used as the template and basis for the Justice Omereji-led Judicial Commission of Inquiry, a panel Wike set up early in his administration to malign, vilify and persecute Amaechi.

“Sadly, this is the kind of administration that presides over the affairs of Rivers people; an administration that embarks on wholesale forgery and distortion of government documents and then retails it out to his minions, the media and now the judiciary in a shameful and futile bid to defame and destroy Amaechi.

Amaechi noted that Nigerians would not forget how Wike, told the media that the over $43m found by the Economic and Financial Crimes Commission in a luxury apartment in Ikoyi, Lagos and the apartment belonged to him (Amaechi).

“Wike shamelessly said that the money was part of what was stolen from Rivers State – and warehoused in the Ikoyi house by his predecessor and current Minister for Transportation, Rotimi Amaechi.

“Not done with his concocted tales, Wike went further to threaten the President Muhammadu Buhari administration with fire and brimstone if the money is not returned to him (Wike). He gave the Federal Government a seven-day ultimatum to return the money; otherwise, he would institute the mother of all legal actions against the Buhari government to recover the money,” the former governor further recalled.

Reacting, Wike said Amaechi’s reckless blackmail of the judiciary would fail, adding that the former governor’s allegation was unfounded, baseless and a figment of his (Amaechi) imagination.

A statement from the governor’s Special Assistant on Electronic Media, Simeon Nwakaudu, partly read, “…We are not surprised by Amaechi’s antics to blackmail the judiciary. Ever since the Supreme Court victory that validated the election of Governor Wike, Amaechi has never failed to malign the judiciary.

“Governor Wike is a law-abiding citizen, who believes in the rule of law. That is why he has followed due process in tackling the issues of high level corruption against the Minister of Transportation.”