Only Buhari Can Tell When He Will Return- Oyegun 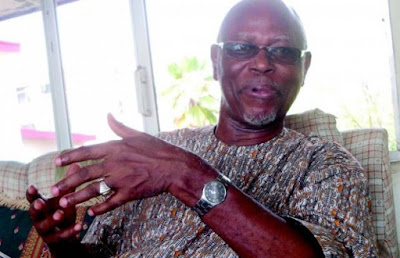 He was part of the team that visited President Buhari in London on Sunday and today, shortly after a meeting at the APC National Secretariat, Oyegun had a brief interview with journalists where he was asked few questions about his trip to London to see the President and below is what he said. Enjoy!


Your Excellency, you led an APC delegation to visit Mr. President. What is his state of health?

Oyegun: I can confirm that Mr. President is convalescing very strongly. Right now, all he is doing is having as much rest as he can to build up his energy, to build up his stamina. But the worst is certainly over. Mr. President is going to come back and he is going to face the responsibilities for which the people of this country have elected him. I am glad to say he is recovering beautifully.

On allegations made by the Governor of Ekiti State on Mr. President’s state of health.

Believe me, I hate to comment on anything the Governor of Ekiti State says because when people have taken leave of common decency, our basic cultural upbringing; when people cease to have respect for elders and cease to have respect for the fact that an elder statesman who is also President of this nation is going through a health challenge and seek to make fun of it, and seek to say things that are so totally unbecoming, it is really not worth commenting on. But I am glad that as at yesterday (Wednesday) even Peoples Democratic Party (PDP) governors went there and thank God nice sober people, they were very excited at the pace of recovery of Mr. President. I hope that finally, even for the most hardened of political adversaries that common sense and common decency will finally prevail.

When are we expecting Mr. President sir?

Only Mr. President can speak to that. But I am glad he is having a lot of rest. And I wish it was possible to say take a longer time getting truly ready but he is beautifully making progress with his recovery. We discussed issues with him, but basically it was a courtesy call. People who are genuinely concerned, who want to see him, who want to chat with him. We had quite a good chat, quite a good meal. As you could see he is still his old jovial self. He had so many questions about events back home, just wanting of course to get our own perspective of things which we did. I thoroughly enjoyed the visit and I came away very happy.