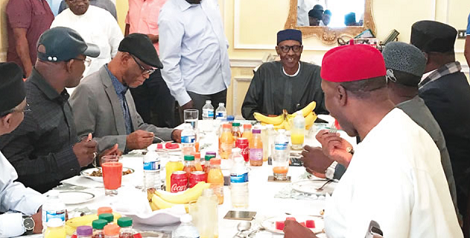 The picture of a handful of APC governors and President Muhammadu Buhari, which was purportedly taken in London yesterday, is old and fake, ex-Aviation Minister and Buhari’s unsparing critic, Femi Fani-Kayode, has said.

In an article currently circulating on the web, Fani-Kayode said he was “reliably informed that (the photo) was taken during a Ramadan

in Abuja sometime back and not yesterday in London.”

He also noted that though the photograph was meant to have been taken in London, “curiously, all the drinks on the table are Nigerian products and Nigerian-made.”

“Did the governors take all those drinks along with them to London when they went to see the President?” Fani-Kayode asked. He also asked to know if President Buhari was no longer returning anytime soon, as claimed by Acting President Yemi Osinbajo and some government officials who, he noted, “recently told us that he (Buhari) would be back on the 28th of July.”


He described the photograph and the governors’ visit as “puerile and nauseating conspiracy.”

Reminding the nation about President Muhammadu Buhari’s statement at his inauguration where he said “I belong to all,” Fani-Kayode wrote, “We do not wish the President dead; but we have a right to know the truth.

“As a matter of fact, we demand to know that truth because, as he once said himself, he ‘belongs to us all.’”

Expressing doubts about the much reported meeting, Fani-Kayode asked why the Nigerian and foreign media were not allowed to cover the proceedings and participate in the event.

He also wondered why the Villa press corps did not take one of their own cameramen to London and make a short video of the event.

He would also want to know why President Buhari was not recorded on audio tape and interviewed while he was with his guests.

He said that Governor Rochas Okorocha’s statement could not be believed for all
of the reasons he (Fani-Kayode) had stated.

Tearing the photograph apart, Fani-Kayode asked, “Why did Buhari not shake anyone’s hands during the photo-shoot?

“Why did he not get up from his chair…? Why was he just sitting there …?”

He advised those who love Buhari to tell him to either resign or be taken to a Nigerian faith healer (name withheld).

Taking umbrage against the Nigerian media, Fani-Kayode wrote, “…We have a media that is so fawning in its attitude when it comes to the Federal Government and that is so easily intimidated that they simply refuse to ask the right questions about this matter, or undertake to carry out the necessary investigations with a view to establishing the truth.”

He also condemned the National Assembly for refusing to impeach Buhari.

He wrote: “Yet it doesn’t stop there. We have a Senate with 109 distinguished … senators and a House of Representatives with over 300 honourable legislators and yet, not one of them has the fortitude or guts to call for the resignation of this … man…”

He concluded his rather long write-up by recommending: “It is time for Buhari’s seat to be declared vacant and it is time for Acting President Yemi Osinbajo to fully take over and be sworn-in as the new and substantive President of the Federal Republic of Nigeria.”