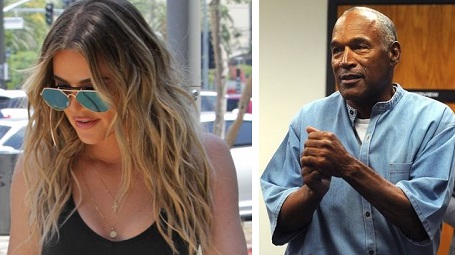 For years, Khloe Kardashian has been plagued with speculation that Robert Kardashian isn't her real father - instead it's been sensationally claimed that her dad is actually former client and Kardashian family friend OJ Simpson.

So it was little surprise on Thursday, as the former NFL star was granted parole after serving nine years behind bars for an armed robbery, the trolls came out in force.

Under Khloe's most recent Instagram pictures, the reality star was inundated with comments about her 'dad' being released from prison. One joked: "Are you excited to see your dad? I know I would be after 9 years! Congrats!"

While a second shared: "Your father is out of jail I'm so happy for you."

That prompted Khloe to fire back with this witty response: "I don't know... Some days I'm OJs daughter. Others I'm Robert's daughter."

Questions over Khloe's paternity intensified when Jan Ashley and Ellen Kardashian - who were married to the lawyer after he and Kris split up - claimed Robert wasn't her biological father.

"The audacity you have to mention my father's name like this!" Khloe responded at the time.

"Should be ashamed of urself! I let a lot of things slide but this one is really low... YOU ARE DISGUSTING! (yes you know who YOU are)."