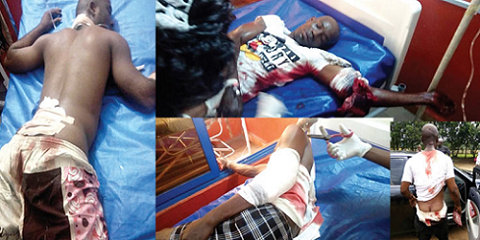 The spokesman of the Command, Mr. Geofrey Ogbonna, who made the announcement yesterday in Umuahia, however, declined to disclose the identities of the operatives.

He said: “The shooting did not involve the police alone: an officer from the Department of State Services, DSS, was also involved.

“The two persons have been arrested and are being detained. Investigation into the incident has commenced.”  Ogbonna said the Command condemned the ‘dastardly act’ and gave assurance that there will be fairness and justice at the end of the investigation.


Meanwhile, Abia Sector Command of the FRSC has declined to comment on the matter.

However, a source at the Command disclosed, on condition of anonymity, that one of the victims had a pellet lodged in a sensitive part of his waist. According to the source, “he was booked for surgery for the removal of the pellet but we learned this morning (yesterday) that the surgery could no longer go on.

“Doctors said that surgery could cause him permanent disability and that it will be better to manage his condition with the pellet in his body.”

The FRSC officials were shot on Saturday by the security aides attached to the Speaker of Abia Assembly, Mr. Chikwendu Kalu.

The incident took place at Arungwa Junction, near Aba, on the Enugu-Port Harcourt Expressway, when the officials stopped the vehicle conveying the Speaker’s wife, Victoria, to Aba.

The officials wanted to book the vehicle as its occupants did not wear seat belts.

The Speaker told newsmen on Sunday he sent his chief detail to the place, but was surprised to hear later that there was shooting.

Kalu, who condemned the shooting, described it as an act of “over-zealousness” by security operatives.