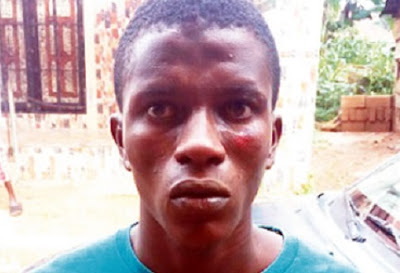 Police detectives attached to the Umuahia Central Police Station have arrested a 200-level student of Computer Science in Abia, Chinonso Ibekwe, for allegedly strangling a tricycle operator, one Peter Eseonu, to death in Umuahia.

It was gathered that Ibekwe had boarded the deceased tricycle, claiming that he was going to pick some harvested farm produce from his mother’s farm at Amuzukwu, a suburb of the Abia capital city.

Punch correspondent gathered that the suspect attacked his victim on arriving the farm, strangled him with a rope and dumped his body in a ditch in the area, while he made away with his tricycle.


It was learnt that an unnamed man, who was defaecating in the bush, witnessed the incident and later raised the alarm in the community.

Oyebade said the suspect was arrested sequel to information received on the missing of the 67-year-old Eseonu, who hailed from Ekenaobizi Umuopara, Umuahia.

He said police operatives swooped on the suspect, who later gave the police information that led to the discovery of the decomposing body of the deceased.

The CP added that the body of the deceased had been deposited in an undisclosed morgue for preservation and autopsy, while the 25-year-old Ibekwe had been charged to court and remanded in the prison custody.