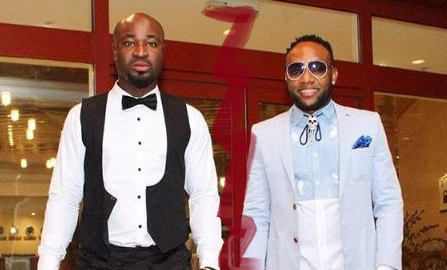 The WAR between former record label mates Kcee and Harrysong is definitely not going to end in years! How do we know this? They are going to court and most court cases in Nigeria does not end in a year, lol. So Kcee is crying out that his life is been threaten and his manager say,it is part of the reason he slammed a lawsuit against Harrysong because he does not want to put laws into his own hands. However, Harrysong’s people are laughing saying this is far from the truth.

On why Kcee slammed Harrysong a lawsuit, his manager,Chidozie Dike told Sunday Scoop, “It is on record that certain personalities threatened the life of Kingsley Okonkwo, aka Kcee, and have also vowed to distort the reputable image of Kcee in the eyes of right thinking members of the society, and more especially his esteemed fans and business associates. In order to protect his life, image, integrity and reputation, he approached the court of law to seek for the enforcement of his fundamental human rights which he is entitled to as a Nigerian citizen. In addition, he has also sought the help of the Nigerian police to protect his life and investigate the threats to his life. As a law abiding citizen, he did not wish to resort to self-help; which is why he decided to take the legal route.” Continue…


When Sunday Scoop also contacted Harrysong’s camp, they laughed off Kcee’s claims. Harrysong’s manager, Desmond said, “He should say how he was threatened; it is not enough for him to say he has been threatened without tendering any evidence. When my car was vandalised, why didn’t I say they were the ones who did it. I was almost killed during the protest, and it was only natural for me to have said it’s Kcee’s handwork. Kcee claims to be a music artiste, then he should get busy during music. We are busy making music and he is just distracting us. Let him stop all these childish controversies he is creating to make himself relevant. Since it is already a court issue, we would meet in court. We have 42 days to respond to their summons. We have an attorney just like he has an attorney, and both sides will be heard. For the records, Harrysong is no longer with Five Music; his contract with them has expired.”