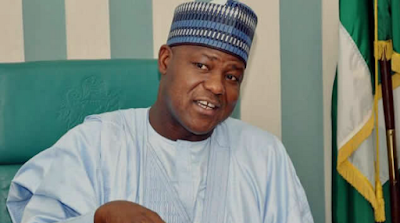 The Speaker of the House of Representatives, Mr. Yakubu Dogara, on Monday raised the alarm over the deployment of military personnel in over 28 states in the country.

Dogara said the development was an indication that Nigeria was already in a state of emergency in peacetime.

The Speaker expressed shock over the growing trend of soldiers taking over civil and security duties constitutionally reserved for the Nigeria Police.

According to him, in peacetime, soldiers are merely to complement the police and other civil authorities.


He expressed surprise that they were visible in almost all parts of the country doing the work of the police.

Dogara spoke in Abuja at a “Capacity/Interactive Needs Assessment Workshop of Security Sector Related Committees in the House of Representatives.”

It was organised in collaboration with Policy and Legal Advocacy Centre.

He cited Section 217 of the 1999 Constitution (as amended), which Dogara said defined the duties of the Armed Forces, contrary to what they were seen doing these days in many states of the federation.

Dogara stated, “It is worrisome that Nigeria is effectively permanently in a state of emergency as the Armed Forces are deployed in more than 28 states of the federation in peacetime.

“Section 217 of the constitution spells out the duties and responsibilities of the Armed Forces of Nigeria, which include defending Nigeria from external aggression; maintaining Nigeria’s territorial integrity; and securing our borders from violation from land, sea or air; suppressing insurrection and acting in aid of civil authorities to restore order when called upon to do so by the President.”

He also spoke on the funds appropriated for security operations annually  by the National Assembly, saying that the legislature must ensure the judicious application of the money.

“Related to the constitutional powers of the National Assembly to appropriate funds and thereby allocate funds for security, is the power to ensure that such monies or funds appropriated are used in a transparent and accountable manner and for the purpose for which they have been given.

“The National Assembly’s powers of legislative oversight cannot therefore be over-emphasised,” he told the session.

On the rising security concerns in the country, Dogara pledged the readiness of the House to provide legislative support to the executive to confront the problem.

The Speaker added, “This past experience which saw a powerful military exercise absolute control and authority over the machinery of government has translated to the current challenge of getting these institutions to subject themselves to legislative scrutiny.

“The often seen consequence of this is inadequate and inefficient delivery of security to citizens, as well as lack of accountability and transparency as they relate to security expenditure.

“The House has consequently, recently amended the Public Procurement Act to make the Armed Forces more accountable in procurement matters.”