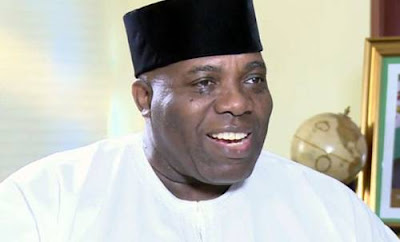 Oh dear! This is one of the most shocking news I am getting lately. Okupe was a die-hard PDP member who had made jest of other parties in the past. It was either PDP or nothing… So people just change when power change hands? We understand people change, but for someone like Doyin Okupe who could ‘die’ for Ex-President Goodluck Jonathan and PDP has a whole? Come on… he should have waited t be part of those who will reform the party. No, I still find this hard to believe, but he made the announcement officially on his facebook page.Oh I still remember the days of Okupe when Goodluck Jonathan was in power, you say one word against the ruling party, Baba fires you back! Indeed, nothing lasts forever. Find his FULL STATEMENT after the cut. Best wishes sir.


It is time to say GOODBYE TO PDP.

It is with deep regret that I publicly announce my resignation from the People’s Democratic Party.

It has to be public because the PDP no longer exists in my ward as a single unified party; it was when I joined it.

My resignation  is based on periods of long introspection and some of the following reasons:

1. It is no longer news that the PDP has been embroiled in a fratricidal internal crisis brought upon it by itself.

Its current direction is difficult to discern and I am convinced that even when the much-expected judgement from the Supreme Court is given, the future of the party is not likely to be significantly affected whichever way the judgement goes.

2. There seems to be too much deception, selfishness and gross nepotism in our polity nationally.

During the NRC and SDP era, there existed true nationalism and brotherhood.

Abiola was a Yoruba man, yet those of us who were Yorubas in the NRC never once thought of voting for him.

The commitment in the North was even more profound. Even the Northern SDP rejected a distinguished successful Kano-born Presidential Candidate, Alhaji Bashir Tofa, and voted for a Southern Yoruba Muslim candidate. Worse than that, both Abiola and his running mate, Amb. Baba Gana Kingibe were Muslims. Yet, it did not matter.

Today, political parties have lost their importance and identities. Once the candidate is Northern, his party is immaterial, all northerners irrespective of their professed party affiliations will vote for him.

This is the major reason why there has been a total absence of opposition in the country in the last two years, and may probably be responsible for the polarisation and sharp ethnic divisions we are currently witnessing in the country.

In the east, there is intense anger and loud call for secession, in the south-south, there is absolute indignation and very resolute demand for total control of their resources, while the south-west is bellicose and hell bent on true federalism and restructuring which many prominent Northerners openly oppose for good or for bad.

Under these circumstances, political parties have lost their flavour and relevance.Certainly, a party like my former party, PDP has no future in the evolving Nigerian Political Circus.

3. This political confusion has percolated to the states, Ogun state being one of the worst hit.
The leadership of the party has been irredeemably fictionalised for nearly a decade.

Presently it is divided broadly into two major factions. One headed by Hon Ladi Adebutu and the other by Senator Buruji Kashamu.

Unfortunately, I do not fit into either group. Hence it becomes extremely difficult for me to operate as a politician under the PDP umbrella in the state.  Yet, all politics is local.

4. The situation in the country may in the nearest future require that matured men of goodwill standby to play a unifying role for the political stability of the country. My membership of PDP may directly or indirectly preclude me from gratifying such noble and patriotic desire.

Undeniably, I have been one of the major beneficiaries (not financially) of the PDP. But for a fact, the PDP and the APC are political platforms that have now expired or in the process of being so.

Therefore, no matter my commitment and passion for this great party, the PDP, it has become menopausal and can no longer bear fruits.

I have therefore decided to withdraw a bit and study the political situation more critically and thereafter take a decision soonest on my next political move.

I will miss my friends, associates and co-travelers on this tortuous political journey and adventure. However, it is also still possible that our paths cross in the nearest future, which will be a delight.

But in spite of my stated pessimism, I sincerely express my best wishes to the more courageous party faithful who I am leaving behind, and I also pray for God’s guidance for them.

For how far I have gone, I remain eternally grateful to Almighty God and Jesus Christ my saviour, to whom ALL powers belong. If it is His will that I still play a role in National Politics in future, then most certainly, and by His grace, I WILL BE BACK.