Amaechi Angry Because They Call Me Mr. Project – Wike 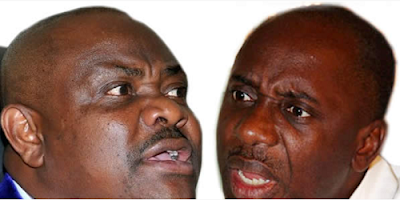 The Rivers State Governor, Nyesom Wike, has said that his predecessor, Mr. Rotimi Amaechi, is angry with him because of his sobriquet, Mr. Project.

Wike also told Amaechi to allow those aspiring to be governor in the state to express themselves, adding that he (Amaechi) could not be governor again.

He also dismissed the claim by the Minister of Transportation that Rivers politics was all about him (Amaechi), insisting that anybody who wished to be a governor should not be stopped from telling the people of the state what he or she intends to do for the people.

The governor, who spoke during an interview yesterday  with a Port Harcourt-based radio station, Rhythm FM, explained that his administration had remained focused and would continue to deliver projects that would improve the living condition of the people.


He pointed out that it was wrong for Amaechi to compare his (Amaechi) eight years as governor to the two years he (Wike) had spent as the chief security officer of the state.

Amaechi had during a lecture to mark his 52nd birthday criticised the tag Mr. Project ascribed to Wike.

But Wike said, “His (Amaechi) anger is that I have been given the name, Mr. Project. I came to serve the people. You are comparing your eight years with my two years.

“Anybody aspiring to be governor should be allowed to tell Rivers people what he wants to do. You (Amaechi) cannot be governor again,” he said.

The governor described as unfortunate statements made by Amaechi on projects and programmes across the state, saying, “It is unfortunate that someone who was celebrating his 52nd birthday would tell Rivers people what is not correct.

On the abandoned projects inherited by his administration, the governor stated that contrary to Amaechi’s claims, his administration paid contractors N6bn to complete the Epirikom-Rumuolumeni Road, which was awarded in 2012 at the cost of N10.3bn.

The governor said that Amaechi merely returned to the state to launder his image, in view of the collapsed APC structure in the state.