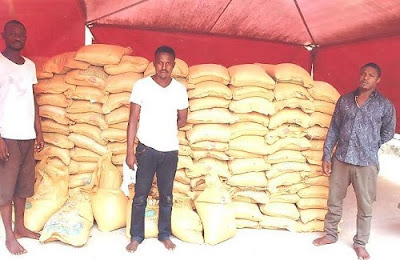 Three fleeing drivers who diverted 1,200 bags of animal feeds valued at N4,081,000 entrusted in their care by the management of Grand Cereals Limited in Onitsha, Anambra State to deliver to a customer in Lagos have been arrested in a hotel in Lagos.

The arrest, according to the police, was made possible by a team led by DSP Olaniyi Festus attached to the Federal Special Anti-Robbery Squad, FSARS, Adeniji Adele road, Lagos Island.

The suspects are: Osas Sampson Agboselobhor, 37, Onyebuchi Nwobi, 32 and AbuchiOgbonna, 32.

The suspects were said to have been contracted by the management of Grand Cereals Limited in Onitsha in Anambra State as truck drivers to convey 1,200 bags of animal feeds in their truck with reg. no. FGG72-XC to a customer ,Mr. AfolabiAyodele in Lagos at a fee of N120,000.


According to the police, the suspects loaded the bags and headed to Lagos after they collected N102,000 in advance from the agreed transport fee of N120,000. They were expected to deliver the goods within 24 hours.

Police alleged that instead of delivering the goods to the owner, the suspects diverted the goods to Ibadan, Oyo State and offloaded it into a warehouse and relocated to Lagos to look for a buyer for it.

When the management of Grand Cereals Limited could not find the suspect and their goods within two days, they reported the matter to the DCP in charge of FSARS, Lagos, Mr. Ibrahim Kaoje.

Following the report, DCP Kaoje directed a team led by DSP Olaniyi Festus to fish out the suspects and the goods.

The police through intelligence gathering swooped on the suspects at a hotel in Egbeda, Lagos and arrested them and took them to the station.

During interrogation, the suspects allegedly confessed to the crime that they diverted the goods while they led the police to Ibadan to recover the goods.

The suspects were arraigned before an Igbosere magistrate court, Lagos on a two-count charge of stealing.

Police prosecutor, Inspector Nosa Uhumwangho, said the offences the accused persons committed were punishable under sections 411 and 287(a)(b) of the criminal laws of Lagos State of Nigeria.

The accused persons pleaded not guilty to the allegations and Magistrate Joy Ugbomoiko, granted them bail in the sum of N200,000 each with two sureties each in like sum.