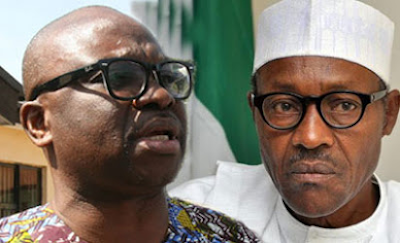 ‎”He can do us the great help by resigning. Not resigning bothers on his integrity. ‎ His absence allows others to suppress and oppress others and that means he is allowing others ‎to suppress their fellow human beings,” Mr. Fayose said.

“There are many governments in one and they are clueless. ‎ We need an active president going by our numerous challenges. ‎How long will Nigerians wait for an incapacitated president‎?


“We cannot wait again for somebody to hold us to ransom. ‎I don’t have any bad blood against Buhari, Osinbajo has no powers without the president. He owes us the duty to tell us the state ‎of his health.”

President Buhari has been in London for medical treatment for an undisclosed illness for about three weeks.

In his reaction, Mr. Ojudu described Mr. Fayose’s comments as disrespectful of a man old enough to be his father.

He wondered why Mr. Fayose would call for the president’s resignation at a time all Nigerians are praying for him.

“He (Fayose) has been quarrelling with everybody. Even in Ekiti, he is demolishing filling stations belonging to the opposition,” Mr. Ojudu, a former senator from Ekiti, stated.

“He has always been insulting the president and disparaging a man old enough to be his father.

“He is portraying Ekiti in a bad light. We are not like that. Is he the only governor, why is it that he is the only one making so much noise?”

Mr. Ojudu said Mr. Fayose had failed in governance, plunging his people into hardship and poverty.

“Right now, fuel is not being sold in Ekiti because he is busy demolishing filling stations under one guise of the other,” he continued.

“People are buying fuel from neighbouring states. People are suffering, they are tired of his ways.

“Go and tell him to concentrate on governance and to stop insulting the president.”